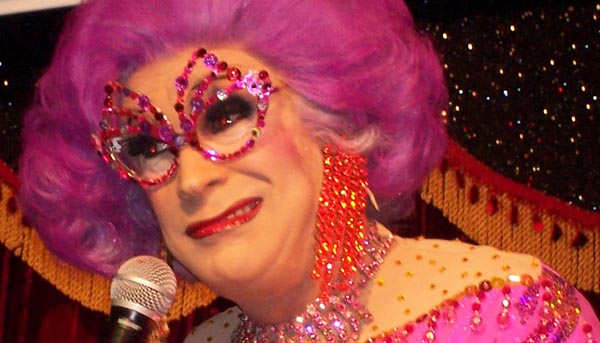 Salisbury Arts Centre (SAC) is to stage the first ever Salisbury Queer Arts Weekender (SQUARK) in April, with a range of LGBT+ talent featuring theatre, music, comedy, cabaret and drag artists from across the UK.

Subject to funding, SAC will also be programming films, talks and workshops, so join SAC on Facebook and Twitter or keep an eye on www.salisburyartscentre.co.uk for updates.

Among the planned events is a performance by the London Gay Men’s Chorus, an appearance by soulful duo O’Hooley & Tidow and one man, 21 woman show, The Fabulous Ceri Dupree.

In a brand new solo theatre and storytelling show, Radio 4 and festival regular Rosie Wilby interweaves a rich, romantic narrative about two people connecting over a shared love of Richard Hawley music and the London skyline with their eventual breakup emails and the visits of three ghosts from our romantic future, past and present.

Having the originality and skill to invite comparison with the most celebrated harmony duos, from early Simon and Garfunkel to the iconic Kate and Anna McGarrigle, Belinda and Heidi’s powerful, deeply moving, and soulful performances are infused with an honesty and empathy that will disarm the hardest of heart.

The FAAAAAAABULOUS Ceri Dupree is back on the road with his One Man, 21 woman show, presenting a glamorous evening of hysterical comedy, amazing vocal impersonations and jaw dropping, eye popping costumes. You could meet Adele, Cher, Joan Collins, Lady Ga Ga, Bjork, Shirley Bassey, Camilla Parker Bowles and even the Queen!

“Dupree storms the stage with style, wit, glamour, and a pace that leaves you amazed.” (Time Out)

Internationally acclaimed comedy cabaret chanteuse Miss Hope Springs plays the piano and sings songs from her all original self-penned repertoire and tells hysterical stories from her ‘Ritz to the pits’ showbiz life. Hope is the creation of award-winning composer lyricist and entertainer Mr Ty Jeffries who spent some of his formative years growing up in Hollywood and even danced down Sunset Boulevard with Fred Astaire. Recommended age 16+

The London Gay Men’s Chorus is no ordinary choir.  It started life in 1991, when nine friends sang Christmas carols at Angel Underground Station to raise money for the Terrence Higgins Trust.  Fast-forward to today and this band of singers now has over 200 members and is the largest gay choir in Europe. The LGMC Ensemble is a smaller group of experienced singers, around 16 members of the main Chorus. Experienced and talented performers, the Ensemble will blow you away with songs from their vast repertoire.

Sadie Lee is an award-winning painter, art educator and antiquated Disc Jockey. For nine years she was a DJ and co-promoter of the much loved Lower the Tone – a club for people who hate clubs in North London. She has DJed at the Flare Festival at the BGI, the Schwules Museum Berlin, Ladyfest Feminist Arts Festival in Estonia and the legendary Bell in Kings Cross. Hard-core 1970s in her dress sense as well as in her taste in music, she favours an eclectic selection of old-fashioned pop songs.

Tickets to all events are available from Salisbury Arts Centre.