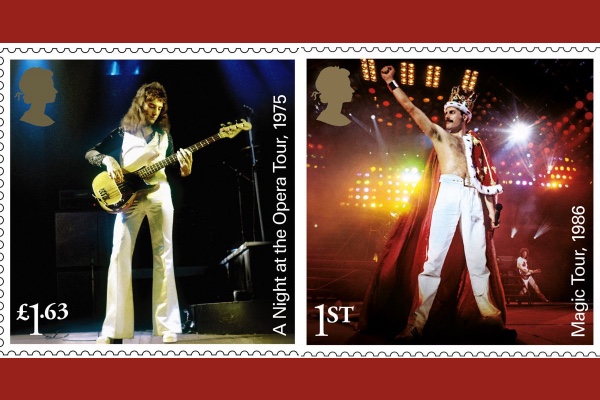 They are one of the most iconic bands of all time. Now the Royal Mail have announced a new collection of stamps featuring Queen and Freddie Mercury. A special set of 13 stamps based on eight of their album covers alongside some of their legendary performances go on sale Thursday 9th July.

“Wow- stamps featuring our album covers” enthused Queen drummer Roger Taylor. “What an honour.We must be really part of the furniture now.”

Lead singer Freddie Mercury sadly died in 1991 due to complications with AIDS at the age of 45. The bisexual singer songwriter`s vocal dexterity and stagecraft leave an enduring legacy. The 2018 film Bohemian Rhapsody brought them a generation of new fans. The film takes it`s title from one of their most successful tracks which also ushered in music video back in 1975. With their extensive back catalogue Queen still tour with Adam Lambert taking lead vocal duties.

Guitarist Brian May said of the stamps ‘Since we four precocious boys started out on our quest 50 years ago, our lives have been devoted to making our impossible dream come true. Sometimes it’s strange to wake up and realise the position in which we are now held – we have become a national institution, and nothing brings this home more than this incredible tribute from Royal Mail.’

“With their truly original, theatrical sound and effortless ability to mix musical styles, Queen are rock royalty. We pay tribute to one of the most loved bands of all time with these stunning stamp” said Phil Parker of Royal Mail. Queen are only the third band to be celebrated by a collection of stamps from Royal Mail after the Beatles in 2007 and Pink Floyd in 2016.

The stamp collection is available for pre-order here.