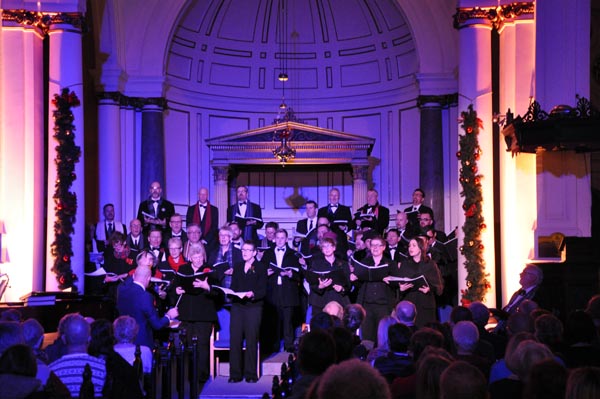 The Actually Gay Men’s and Women’s choirs came together for ‘Twas the night before Christmas at St Andrews Church, Hove on December 23.

ST ANDREWS Church was packed to the rafters for the annual Christmas offering from the two Actually Choirs.

I rarely get into the Christmas spirit until I hear a Christmas carol and the two choirs performed a selection of traditional carols together with the audience, who were in fine voice, creating a lovely Christmas feeling in the church. Christmas had arrived!

The two choirs came together to sing a few Christmas numbers including O Holy Night, Mary’s Boy Child, The Twelve Days of Christmas, Ring out the Bells and Walking in the Air from the Snowman which vocally showed the two groups off best when they sang together.

Singing with the men has clearly given the women more confidence and they were musically much more secure than the last time I heard them perform. The men are producing a smaller sound, but  the combined sound they produced together with the women was very warm and rounded with both choirs benefitting musically from singing with each other.

Hugh Martin and Ralph Blane gave a fine rendition of Have Yourself a Merry Little Christmas.

The women alone sang a haunting, moving version of Whisper of Angels to the music of Faure’s Pavane, Opus 50. Their tone was warm and they were clearly more disciplined as an ensemble under the baton of Jason Pimblett.

Jason Pimblett, the musical director of the Actually Gay Men’s Chorus, knows his male singers inside out and understands exactly what they are capable of. While the men’s chorus presently are making a smaller sound, they are listening more carefully when they perform, producing fewer rough edges in the loud sections.

The women certainly benefited under his baton and, maybe more importantly, have gained greater musical confidence and a more confident attack from singing with the men.

The evening was hosted and held together by Gerry McCrudden MBE. Accompanist Coady Green was very sympathetic with his accompanying, always listening. Colin Blanchflower played keyboards and organ, and Jack Watkins percussion.

Sound and lighting for the evening were provided by Lyndon Ford and the event was produced by Chris Jessop.

Actually CIC have a new chair, Bill Kelly, to take them forward into 2015. He replaces John Hamilton, who had worked hard over the years to get the chorus to where it is today. His work with the chorus should be recognised and acknowleged.

Actually Gay Men’s Chorus’s next concert is I Got Rhythm on April 17 and 18 at St Andrew’s Church, Waterloo Street, Hove.