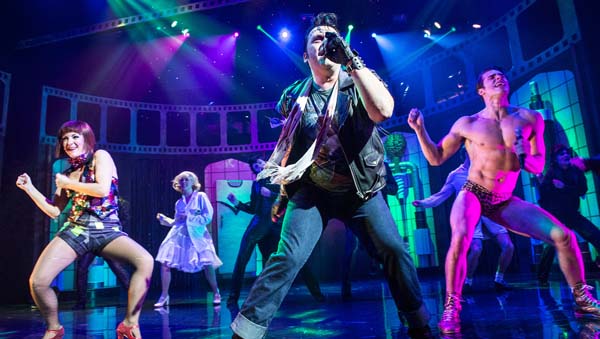 The Rocky Horror Show at the Theatre Royal, with new cast, set and production, rises to the occasion with enough kinky gusto to help you cast away your inhibitions.

DEFTLY narrated by suited comedian Dom Joly, who takes the expected repartee with the audience in his stride, the kinky tale tells the story of a newly engaged couple getting caught in a storm.

In need of a phone, the hapless duo come across a spooky castle, home to the debauched Dr. Frank-N-Furter, a pan-sexual, cross-dressing mad scientist portrayed by a strapping Stephen Webb who, while lacking Rocky stalwart David Bedella’s unbridled insanity, comes with a whole load of lip puckered gyrating during Sweet Transvestite, a song dripping with raw sex appeal.

Bathed in nostalgia, the set design comprises cartoonish cut outs and the lush opulence of Frank-N-Furter’s castle and the kitsch laboratory scenes, parodying science fiction B movies with naff gadgets and lasers, suck in the audience, many of whom had succumbed to the mantra “don’t dream it, be it” by wearing feather boas, suspenders and a healthy amount of leather!

The sexually repressed and naïve Brad and Janet were performed with just the right amount of all-American values – Joanne Clifton served up a dollop of Apple Pie as good-girl-gone-bad Janet, coquettish during Touch-a, Touch-a, Touch-a, Touch Me, and Ben Adams as the perpetually confused Brad broke our hearts (just a bit!) with the soppy ballad Once in a While.

Laura Harrison was electric as fan-favourite and raven-haired Magenta, and together with Kristian Lavercombe‘s Riff Raff, the snivelling hunchbacked master of Frank-N-Furter, she plotted and calculated, culminating in a bombastic return to their home planet of Transsexual, in the galaxy of Transylvania, before an orgiastic party took hold with the ensemble piece Rose Tint My World, which saw the now corseted Brad, Janet, Rocky and Columbia, a groupie whose hyper-activity was brought to life with just the right amount of helium by the wonderfully named Miracle Change, come together.

After over 40 years, the Rocky Horror Show has suffered little more than a ladder in its tights, and is still a licence to ‘strip away’ the mundanity of everyday life and slide into something a bit more comfortable.

The Rocky Horror Show is on at the Theatre Royal, Brighton until Saturday, January 5.