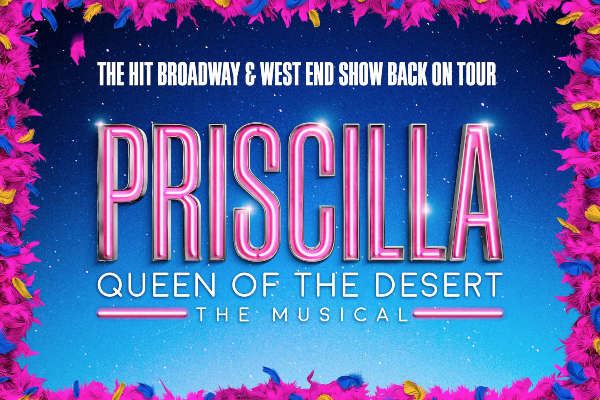 Priscilla, Queen of the Desert

Based on the Oscar-winning film, Priscilla is the hilarious adventure of three friends who hop aboard a battered old bus bound for the Outback to put on the show of a lifetime. Their epic journey is a heart-warming story of self-discovery, sassiness and acceptance.

The iconic musical Priscilla Queen of the Desert is on tour and has just pulled into Brighton. Starring Strictly Come Dancing winner Joe McFadden. This smash-hit show features a dazzling array of stunning costumes, fabulous feathers and a non-stop parade of dance-floor classics including It’s Raining Men, I Will Survive, I Love The Nightlife and Finally!

What a perfect festive show for Brighton this is, it’s a furiously feel-good show, packed with superb performances and quality costumes and is high octane fun, no sequine was spared in the pursuit of musical glory.  We very much enjoyed it. Produced by Jason Donavan and directed by Ian Talbot this is a polished team who know who to serve it up to an audience who lapped it up.

Lead roles were well done, Joe Mcfaddon  had a sweet strong tenor voice which was a delight and his and Miles Westerns performances were both really strong.

The resistance and developing relationship between Felicia & Bernadette-  two of the main characters – was performed wonderfully, with sharp tongue lashing and bitchy comments much enjoyed by the audience

The Trans story-line was handled with dignity and some understated quality engaging acting with real heart to it. The sparing between Nick Hayes’s boisterous Felicia and Miles Westerns world weary but dignified Bernadette is cruel but Bernadette rises above it and Felicia is exposed as naïve and in need of some awareness raining which they embark on.  This is a fun piece of theatre with a seriously strong and important message at its heart, there’s no compromise about that here, and with some soft political messaging in the play with an Aboriginal community being represented in a respectful segment, giving an opportunity for some ironic post-colonial commentary. This is a play all about acceptance, of your lot, of your past and ultimately of your potential.

The second half blossomed, with the light touch love story between Bernadette and  Daniel Fletchers heart-throb Bob being given a mature approach. Giving this love story a sensitively framed handling allows an intimate layer to add to the narrative. It was very nicely done, not overly sentimental, but with a direct honest clarity that allowed us to see the hopes and vulnerability of these two older people.

What fantastic choreography from Tom Jackson-Greaves along with splendid musical direction from Sean Green, the dancing ensemble were a treat, moving like a flock of fabulous ostriches, in step, with flirtatious menace each one utterly committed and a delight to watch, there was some amazing footwork.

The three singers who were doing the background chorus were perfect, giving us a Shangri-La’s type commentary, always on, gently nudging the narrative forward, shifting the set. They were a very strong trio and again moved in a synchronous and seductive way, singing and dancing and serving up a visual feast.

Costumes were pretty relentless with feather, sequins and sparkles in abundance, with some wonderful attention to details, the rough outback miners costumes having the same amount of attention as the full on floor show extravaganza. Sound balance wasn’t too good down the front in the stalls, at the beginning with the music blaring out a touch but this got much better and was properly balanced in the second half. Stage and set was compact and flexible with some innovative corrugated iron roofing being used, the bus construction was a lovely moment of satisfying theatrical flair.

My companion, whose birthday it was and was hardly old enough to remember the original film, really enjoyed the cake scene with its knowing panto version of Macarthur Park, reducing him to giggles.

A festive bauable of feel good theatre, the prefect show for Brighton over the Xmas period, and this tour has settled into the plush surroundings of the very comfortable Theatre Royal with ease. The audience was loving the production, with a lovely big party feel at the end of the show,  it’s infectious nature got the whole house up on its feet, joining in.

If you don’t know the film then this production gives you  an easy access into this classic musical.

We left humming and chatting into the dark December night along with the rest of the animated packed house but with our hearts warmed by this charming show.  Ticket sales are going well, so consider booking soon if you want to get along to see this and the Theatre Royal also has a season of other Drag queens performances coming up.

For more info or to book tickets see the Theatre Royal website here: