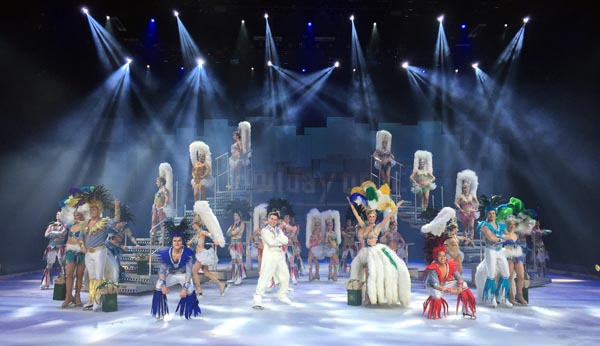 Holiday on Ice the world’s most visited ice show made a welcome return to The Brighton Centre last night, with their new show PLATINUM.

THIS 70th Anniversary production is choreographed by Brighton resident Mark Naylor, also the creative director on the show. With PLATINUM, Mark has created a magnificent homage to 70 years of previous Holiday on Ice shows. PLATINUM is quite simply stunning!

This is a show of two separate halves.

The first half: That Was Then, is a reverential retrospective, using archive footage from over 70 years of Holiday on Ice shows featuring legendary names from skating world including Olympic champions Sonja Henie, Katerina Witt and Robin Cousins, whose name when mentioned brought a roar of support from his home town audience.

PLATINUM is reassuringly nostalgic and a visual feast. The waltz scene in the Grand Spectacular section is Holiday on Ice at its very, very best. Beautifully skated, lovingly choreographed, intoxicating to watch.

The Gospel section is uplifting, great on the eye and includes the Wheel where the skaters form a straight line on the ice and skate anti clockwise to create a circular wheel. No Holiday on Ice show would be complete without one. It was clean and crisp, brilliantly executed and really got the audience going.

Some of the finest moments in the entire evening are in the first halve of the show, which is stripped back to classic Holiday On Ice production values. Simple visuals, great costumes, a fabulous soundtrack, rigid lines and fast skating.

PLATINUM is compered and hosted by singer, dancer and actor Ray Quinn who won the fourth series of Dancing On Ice in 2009 and the final All Stars series in 2014. He cleverly sets the scene during the opening sequence, Dance Hall of the 40’s when he introduces the impressive lineup of international skating soloists appearing in the show to the audience.

It is a nice touch to have the stars introduced at the top of the show. In my view this group of solo skaters worked as well together and with the wider company than any group of skaters I have seen while covering Holiday On Ice shows for the last 20 years. In particular, the American skater Michael Chau was impressive and clearly connected with the audience as did the Russian pairs skaters Dari Perminova and Evgenii Beliann who are a delight to watch and share a special relationship with the audience.

Ray Quinn sang I don’t do don’t a track from his new album Dare to Dream and ariel gymnasts Artem Lyubanevych and Oleg Shakirov provided beefcake appeal, during their routines on the ropes.

The second half: This Is Now, brings the audience right up to date with where Holiday On Ice productions are today.

For much of the last 10 years as their audience has got older, Holiday On Ice show has pushed artistic boundaries trying to bring younger people to the show. The second half of PLATINUM is a celebration of those efforts opening with Get in the Club, set in a modern disco. Lazers and great choreography creates an amazing visual while the disco score gets the audience going.

La Vie de Paris combines old and new Holiday On Ice traditions with amazing costumes, a perfect choice of music and a stylishly elegant rather than camp presentation.

The trademark camp was reserved for Brazilia were the solists and chorus started to let their hair down creating a wonderful visual treat. The complete row in front of me that included the Mayor and Mayoress of Brighton and Hove could barely keep their bottoms on their seats. We all wanted to dance.

Brazilia was just the warmup for the Finale, a camp classical Holiday On Ice spectacular that had everything, fireworks, costumes that lit up and skaters with sexy bodies.

Brighton has missed not having the annual visit of Holiday on Ice every January and it was really good to see the company return this year, if just for 6 days. For many supporters of Holiday On Ice in the City, Christmas is not Christmas without the visit.

There is something for everyone in this show; traditionalists, the new younger audience that Holiday On Ice has been cultivating over the last 10 years and of course the large group of gay people that make an annual pilgramage to the campest show in town.

These spectacular shows will only continue to tour if people support them. Brighton needs events like this to visit the city. Pop along and experience a good old fashioned night of Hollwood magic and nostalgia at the Brighton Centre.

Brighton is the only city in the UK Holiday On Ice are visiting this year.

There are two shows a day at 2pm and 7.30pm on Wednesday, Thursday and Friday. Three shows on Saturday at 1pm, 4pm and 7pm and two shows on Sunday at 1pm and 4pm.