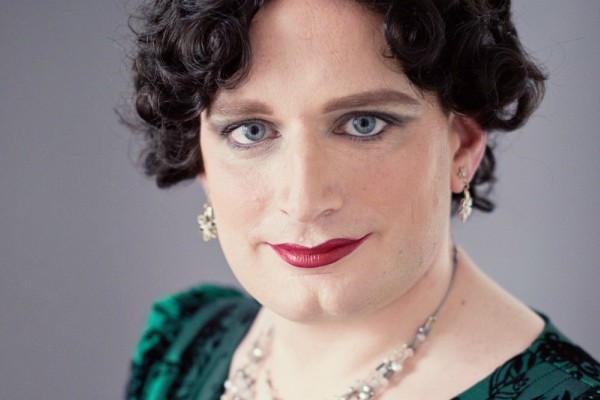 An evening with a lady who isn’t to be forgotten. Phil Lunn Is…. A cabaret singer, created uniquely for this one performance. Entirely improvised songs and improvised conversation, all inspired by the audience. Phil Lunn Is……whoever tonight’s audience wants him to be and tonight the audience wanted him to be Barbara Hymmel-Hempseadgh, famous Welsh siren, tainted by scandal and an unfortunate love life and addiction to alcohol.

Phil’s’ premise is delightful and although s/he seemed slightly nervous tonight the character was engaging. It was the first night of a new fringe show & venue in the tastefully converted shipping containers of The Warren. Barbara was fairly well realised, timid, eliciting information in a gentle conversational way from the surprisingly well behaved audience and then weaving it into a tableau of songs which crossed the emotional motorways of her life, weaving across lanes, stopping at hard shoulders, soft verges and then ending up, neatly, back where she’d started.

A nice tight peace of improvisation and singing although I felt that some obvious offers from the audience were bent into what Barbara wanted to sing about, and there was an odd discord with a direct request for the ‘shipping container blues’ which turned into a sad reflective ballad, overall the songs were funny.

Responding to the audience daft suggestions, from Mexican dances to small eared men, a delightful piece of nonsense of drowning in a cauldron of marmalade and the opening number ‘I was drunk the day you got out of prison’

Barbara charmed us, we left loving her even more than before, wishing she was back in the limelight where she belonged before her addictions brought her down, and this lovely gentle clever show was a delight and sent us off into the buzzing warren crowds with a smile.

Theatre Box @ The Warren – full details of the show here

To book tickets in the Brighton Fringe see the website here.