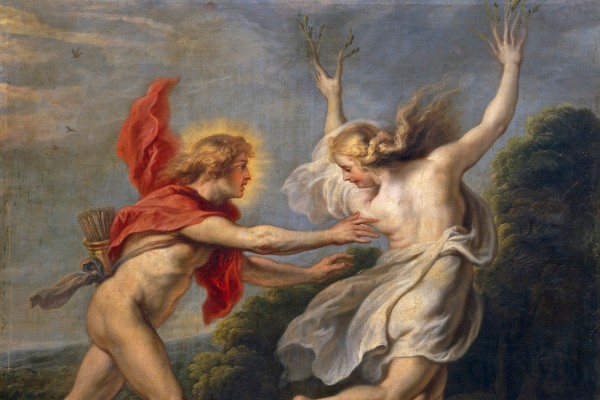 This first matinee offered a charming, gentle and not over-long ( 2 acts of 40 minutes each) relaxing musical entertainment. I am a fan of BREMF but this was my first opera of theirs I had seen. This piece, first performed in Mantua in 1608, is considered to be an early experiment of combining music and drama in a new style that would result in opera as we know it today.

A simple synopsis. An evil serpent is killed by bow and arrow by Apollo who then shows off to Cupid teasing him about his abilities as a blind archer. Cupid, together with his mother Venus, plan to get their own back on Apollo and, with the use of Cupid’s arrow, cause him to fall in love with Dafne. The love is not returned, Dafne turns into a tree which Apollo, in turn, honours and celebrates.

A cast of 11 new and emerging singers and 8 musicians featuring 2 impressive chitarrones played with style by Jonathon Bougt and Sergio Bucheli, offer up well-balanced harmonies and evoke the true sound of Early Music.

The programme informs us that the company only had one week to put this together in this specialist way and I was very comfortable with the black box setting and good use of 6 chairs especially with the tree at the end. However, I struggled with the Vaudeville style footlights and intense crosslight which, although working well for the dramatic scenes , offered no change of more joyous emotion when required. I was also distracted by the choice of costume which mixed the chorus shepherds as Peaky Blinders Men, WW2 Land Girls but with a nod towards Edwardian Gentry for the Gods. I get it but it was too big a statement for me personally as was the rather enhanced acting from a fair amount of the cast.

The subtitles were good, concise and helpful without being intrusive, but I would have like more genuine emotion from some of the singers. However, praise must be given to Sofia Kirwan-Baez (Venus), a natural actor who sizzled and enticed and CN Lester as Tirsi who bought believable pain and depth to their aria.

An enjoyable offering and a wonderful introduction for anyone unaware of Brighton Early Music Festival.