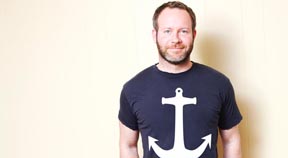 Matt Alber at Latest Bar Brighton on July 31 in association with Authentic Productions.

Sometimes all you need to hear is one bar before a singer gets to you.

I had never heard of Matt Alber before I saw his concert posted by a member of the Brighton Gay Men’s Chorus and was not sure what I was letting myself in for.

All I’d heard was that he was a Grammy award winning gay singer songwriter well known on the scene in the US, and who after a couple of tours had an increasing number of followers here in the UK. One bar is all it took to be captivated, and I’m not ashamed to say he brought a lump to my throat frequently throughout the night.

There is something strangely flexible about his voice. At times when Matt reached for what seemed to be his upper range he would suddenly power right through the highest note into a falsetto that was as rich and natural as his given voice. He had his audience in the palm of his hand with gentle good looks and his deceptively boyish charm and banter revealing at times a sharp intellect and tenderhearted appreciation that endeared him to me as a human being.

Most of the material was his own, the life-inspired stories of a truly talented musician with a sophisticated musical take on life. Songs you know included Dylan’s Make You Feel My Love and Houston’s I Wanna Dance With Somebody. At one point he performed an astounding a capella version of I’ll Be Loving You Always taking it to dizzy heights of jazz improvisation which I’m sure would blow Irving Berlin away along with the writers he dedicated his own tribute songs to, Billy Joel and David Bowie. I believe all those guys would have loved that performance.

He currently has an album out ‘Wind Sand Stars’. I think my favourite track on it is House on Fire, but seeing him live is a must. I can guarantee a great night.