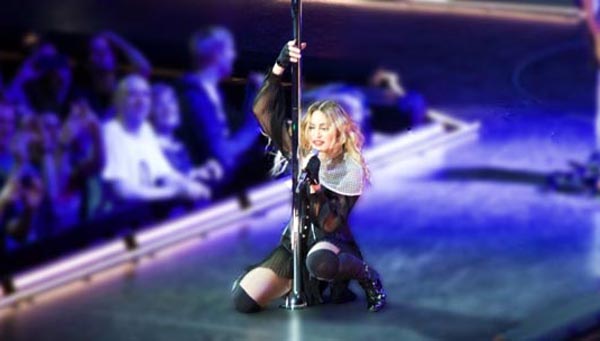 “Bitches are you in my gang?” yells Madonna to a capacity crowd at London’s O2 arena and 20,000 forty something homosexuals scream in hysterical response and possibly regret not remembering their incontinence pants.

Whilst I have seen Madonna put on a show before, The Rebel Heart Tour has to be up there amongst her finest onstage outings. Although not amongst her most commercially successful, the Rebel Heart album is a cracker and of the opening seven songs, six are taken from her latest release.

Live, they’re even more energetic than the recordings; from the gratuitously theatrical staging of set opener Iconic to the Last Supper style staging of Holy Water and Devil Pray, Madonna never falters neither physically nor vocally and for almost two and a half hours, the 20,000 strong faithful are eating out of the palm of her hand.

There may be a few more quieter moments than on previous tours but rather than rest points for an aging superstar, these are opportunities for more reflective acoustic versions of all but forgotten gems which on Wednesday included True Blue and Who’s That Girl.

For a woman who has hundreds of hits to choose from there are bound to be personal favourites dropped from the possibles but Madonna and her creative team threw everything at the spectacular production from Deeper and Deeper to Holiday via a ukulele accompanied La Vie en Rose sung entirely in French.

Her audience chats were plentiful and warm and she even threw in an unexpected Drowned World – Substitute For Love, previously not included on the tour, and dedicated to the memory of her interior designer friend David Collins.

Whilst the O2 may this year alone have hosted GaGa, Kylie, Taylor Swift and Katie Perry to name a handful of Madgesty chasers, tonight Madonna showed us all why “Bitch, I’m Madonna”.