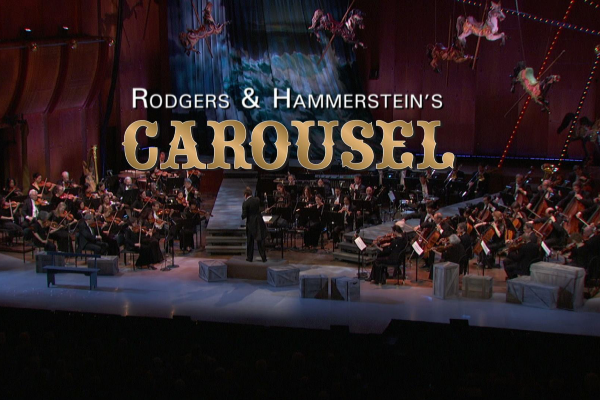 One of the joys of trips to New York is the glory of the Lincoln Center, home of the Metropolitan Opera, but also full of other musical delights most nights of the week.

This lockdown treat of a concert version of Rodgers and Hammerstein’s dark musical Carousel is a joy to listen to.

And the great benefit is that you can close your eyes and just listen because there is very little action in this slimmed-down performance on the concert platform at Avery Fisher Hall.

But then you would miss a visual treat in the shape of  Nathan Gunn – whos’e been drubbed a “ barihunk “ because of his exceptional operatic voice and marvellous physique. As a Professor of Voice at the University of Illinois, he’s certainly fully in control of his vocal instrument and produces power, high clarity and deep rich tones – even in his speaking voice.

He is magnetic as the troubled and ultimately dead carousel barker Billy Bigelow. He’s matched however by a stellar cast of Broadway and opera greats and backed by the Saturn rocket of the New York Philharmonic orchestra under Rob Fisher.

The performances are in no way inhibited by the fact that they really are trapped in a narrow platform corridor of space, and the staging is improved by the ensemble often entering on ramps through the orchestra.

There’s joy too in Kelli  O “ Hara’s central role of Julie Jordan, which she performs with pathos, reserve and a great inner power- and her singing is just to die for – as Billy does.

The normally boring role of Enoch Snow is here taken to new heights by the charismatic Broadway star Jason Danieley  with his ever-so-light tenor tones.

Nettie – who has 2 of the best numbers – June is Bustin’ Out All  Over and You’ll Never Walk Alone – sails round the stage like a battleship going to war and the voice of opera mezzo Stephanie Blythe is alone worth a donation.

Two more Broadway wonders make up the cast – the veteran John Cullum – 83 when this recording was made – turns in a nice cameo as the Starkeeper and Jessie Mueller is a pleasing and feisty Carrie .