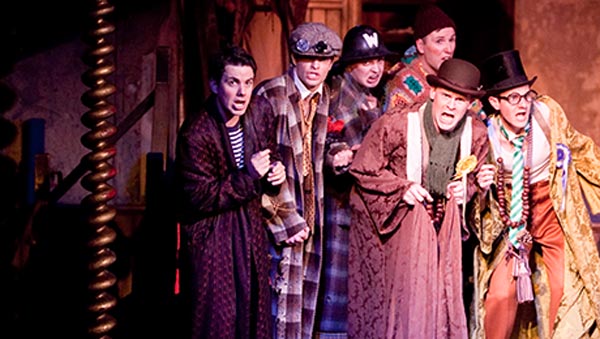 Sasha Regan’s all-male version of Gilbert and Sullivan’s 140 year old comic opera about fairies and a wayward stupid House of Lords has a terrific, funny, energetic and touching style.

A GROUP of what look like posh schoolboys come through the auditorium with flashlights and happen upon a derelict building complete with its magic wardrobe. Through the doors they go to the fantasy land of the show’s setting.

The sexual innuendo of Gilbert’s dialogue is heightened here and no double entendre about fairies and half-fairies is missed – all to the audience’s delight.

It’s a very young cast but they excel in all the roles – especially as the predatory old fogey Peers, lusting after the coy but mischievous Phyllis , played deliciously by Joe Henry.

As the show moves on you forget that the company is accompanied only by the deft piano playing of MD Richard Baker, so lush is the tone of his playing.

The political satire which also lies at the centre of the opera is bang up to date and the meddling of the Lords and the war with the Commons resounds well in these Brexit days.

The singing is superb throughout but especially the pure high notes of Richard Russell Edwards as Fairy Queen and Christopher Finn’s touching ageless Iolanthe.

Alastair Hill as the lecherous double-dealing Lord Chancellor is on top form in Gilbert’s tricky patter songs – none more so than in the fiendishly difficult tongue-twister Nightmare Song where every word is clear as a bell and delivered at frenetic pace.

Duncan Sandilands is a suitably butch Parliamentary sentry in a vest that shows every muscle he possesses, and Richard Carson makes a suitably testosterone-filled shepherd as Strephon.

But the show shines for me on its ensemble playing and particularly the inventive dance routines which come with sign language, taught expertly by the deaf Mark Smith.

It’s a show you will want to see twice, but make sure you see nit at least once.

Iolanthe plays at the Theatre Royal, Brighton until Saturday June 23.