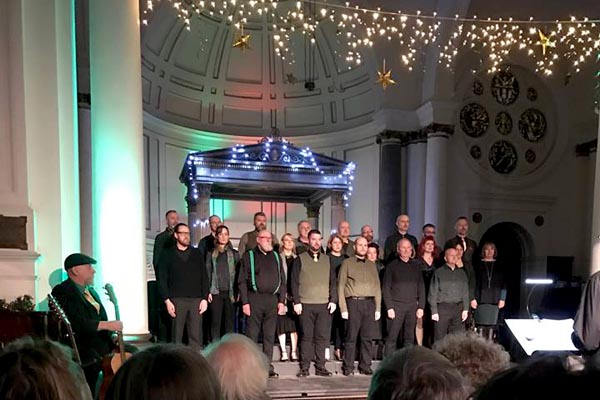 In this dark, cold twilight Brexit time there’s nothing so heartwarming as the wonderful harmonies of the human singing voice.

CONDUCTED by the charismatic Stefan Holmstrom, these two choirs always challenge themselves but never fail to surprise and entertain their audience.

They packed in nearly 30 items during this joyous evening.

Kicking off with Canada’s oldest carol which was hauntingly beautiful they went on to perform a version of the Holly and Ivy which reminded me very much of the tones of Steeleye Span.

Moving on to Iceland we heard the 800 year old Heyr Hymna with its somber harmonies. When Resound sing quietly there is total quality in their restrained sound. Every item brings its own joy and after the Renaissance Riu Riu, the combined choirs gave us the lullaby – like Noche Anunclada .

After the comic girl – power interlude of All About That Bass, the great treat of the first half was Ola Gjello’s Days of Beauty, with its flowing melodies and joyful harmonies.

Pausing in Wales to give us a trio Al Gyfer Heddlw’r Bore, the first half ended with the wonderful Carol of the Bells.

Braving the icy blast for an interval over the road in the Southern Belle pub, the audience packed St Andrews Church yet again for a highly varied second half, which started with the hearty old favourite O Tannenbaum.

At their surpassingly comic best in the rather rude Cheap Flights, the simple but endearing quartet There’s Still my Joy led to the wistful folky Underneath the Stars.

The Irish ballad Parting Glass was a poignant finale piece, followed of course by their signature Hove for the Holidays.

The soloists, too many to name, all played their parts at the very highest level, even battling the cold of the church and the variable acoustics.

Musical accompaniment was provided from Basil Richmond (piano), Anne Whiteside on piccolo and flute, Paul Whiteside on double bass and drum and David Farrer on guitar add a perfect backing.

Ten out of ten yet again for these two talented choirs adding to Brighton’s rich choral family.

The concert was at St Andrews Church, Hove on December 14 and is happening again this evening, December 15 (all tickets sold out). Watch out for both choirs at the 2019 Brighton Fringe .