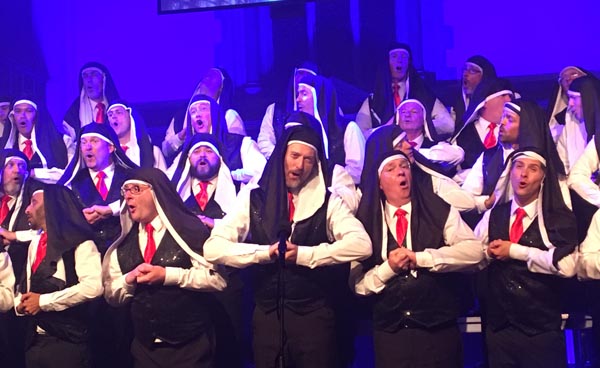 It is difficult to find new things to say about the Brighton Gay Men’s Chorus that I have not written before, but here we go.

At their pre-Pride Concert (July 29) at St Georges Church, Kemptown, they once again turned in a highly polished performance, highlighting the strength in-depth of the chorus’ soloists and the supreme quality of the music team behind this great choir.

Matt Thompson and Chris Wellings were up to the challenges posed by Agony from Sondheim’s Into the Woods. Notoriously tricky to pull off, the pair were more than up to the challenges the number posed. Fabio Leone’s I am Adolfo from The Drowsey Chaperone was deliciously camp and beautifully performed as was Crazy Little Thing Called Love featuring the vocals of Andy Williams who could sing the telephone directory and make it sound cool and contemporary.

Rod Edmunds and Sadao Ueda’s rendition of In His Eyes from Jekyll & Hyde was really special. Both singers connected with the lyrics giving me personally the best musical moments of the evening.

The best technical moment of the evening came during Nick Ford’s And I’m Telling You from Dreamgirls – a massive number for any male singer to tackle. Nick’s performance showed us how secure his vocal technique is, how big his voice is and most importantly, how much in control he is of it. He received the largest cheer of the evening from a very appreciative audience. It was well deserved.

Andy Williams, George Leach, Joe Paxton and Jon Taylor pooled their wide-ranging music and acting talents together for a clever performance of Turn if Off from Book of Morman. The comic timing was genius and gave a real lift to the second half of the show.

Finally a mention for musical director, Marc Yarrow, whose version of This Is The Moment from Jekyll & Hyde was a masterclass in how to effectively phrase a big number like this.

And all this was just the contributions from the soloists….

The title of the show was Showtime – An evening celebrating some of the most beloved Broadway and West End Musicals. The chorus contributions to the evening included a clever arrangement of Aquarius and Let The Sun Shine In, from Hair, a stirring performance of Climb Every Mountain from The Sound of Music, and a new and delicious one to me, Tapestry from Beautiful – The Carole King Musical.

The second half of the show included Xanadu, The Impossible Dream from Man of La Mancha, Stars from Les Miserables and a glorious anthemic arrangement of Bowie’s Life On Mars from Lazarus. All show stoppers in their own right, beautifully arranged and performed and linked together with little vignettes by St John Effingham Smythe played by John Buckeridge.

A small technical point to mention is that during some of the big choral arrangements the first tenors were swamped by the choir and the melodies were temporary lost.

Brighton Gay Men’s Chorus is supported by a first class music team consisting of musical director Marc Yarrow, deputy musical director and accompanist extraordinaire Tim Nail and assistant musical director Joe Paxton who conducted a couple of numbers towards the end of the first half.

To send us on our way happy and ready for Pride at the weekend, the chorus donned wimples to sing I will Follow Him from Sister Act the Musical – a perfect end to a perfect evening.

Bucket collections on the night amounted to £634.85 and were donated to the Rainbow Fund who give grants to LGBT+/HIV organisations who deliver effective front line services to LGBT+ people in the city.

If you want to sing with the Brighton Gay Men’s Chorus they have a new members evening on Tuesday, September 12, at the Brighton Unitarian Church, New Road, Brighton, starting at 7.30pm

Their Christmas show this year will be at All Saints Church, Hove on Friday, December 15.