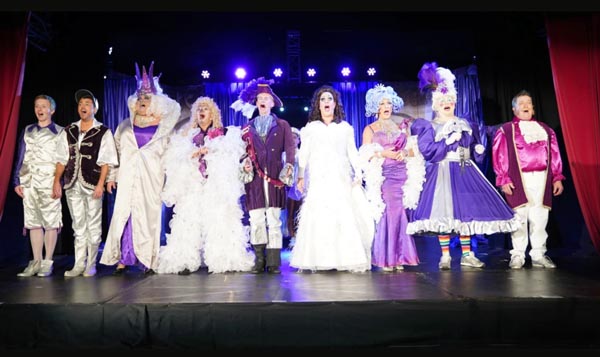 Take six of Brighton’s top drag queens, two concert and cabaret singers, some excruciating jokes, a ton and a half of innuendo and what have you got ? Brighton’s legendary Alternative Pantomime!

BIZARRELY transported from Christmas to the week before Easter, the show is this year a major feature of the annual B RIGHT ON month of LGBT+ events based at the Phil Starr Pavilion on Victoria Gardens.

And, writer Andrew Stark and director Quintin Young don’t disappoint. From the moment Dave Lynn comes on stage as the world-weary Fairy Vape-Juice in the prologue, you know you’re in for a riotous night of jokes about dicks, pussies, back passages and all manner of other unmentionables.

In this version, Dick, our hero played outrageously camp by singer Jason Lee, wants to be Mayor of Brighton but is thwarted at every turn by the Killer Queen of the Rats, played with delicious evil by David Pollikett (aka Davina Sparkle).

To add extra spice to the evening, all the male characters are ultra camp while the women characters are somewhat on the butch side. So, Allan Jay is delightful as the idiot boy Wicky Woo, a Glaswegian fool with a fearsome green furry ventriloguist’s puppet, Dirty Den, whose filthy mind and uttering give us some very funny moments.

Even the dancing boys are at their campest best – played by Steven Banks, Cameron Beresford-Holland, Matthew Bashir White and Jack Lynn.

If you get the idea that is absurdist. Drama with show tunes, you’ve hit the nail on the head. Jon Hughes (aka Sally Vate ) is the raunchy cook Sara-Lee, complete with 3-tiered cupcakes on her head, and our heroine Alice Fitz-Tightly is a beautifully timed performance delivered by Stephen Richards (aka Lola Lasagne) who has knockout songs throughout the show.

And so we travel from Brighton fun fair, to the Marina and via the ship The Salty Seaman to the court of the Sultan of Gran Canaria. It’s the wonderfully eclectic nature of the show that Act One’s finale can segue from Viva Espana to Les Mis One Day More with ease.

The sea voyage of course is ruined by a shipwreck and we are transported to King Neptune’s underwater kingdom, where the highly queeny king, a lovely cameo from Steven Banks (aka Stephanie Von Clitz) introduces us to his Disney-like underwater sea creatures.

And then there’s the Sultan, played by David Anthony, betrothed to Alice, but much more interested in a dancer boy in his entourage.

Outstanding for me was Miss Jason (Jason Sutton) as Dick’s sidekick pussy, looking like a very bedraggled soloist from Cats – and guess what ? He sings Memory – oh yes he does !

Good of course triumphs over evil and the lovers are joined in matrimony.

As the cast sing in the finale – It’s Not Where You Start It’s Where You Finish and this show finishes on top!

Extra chairs have been added to the auditorium so extra tickets can now be released for all performances.

You can also buy tickets in person at the Phil Starr Pavilion Box Office from volunteers of the Brighton and Hove LGBT Community Safety Forum. from noon each day.