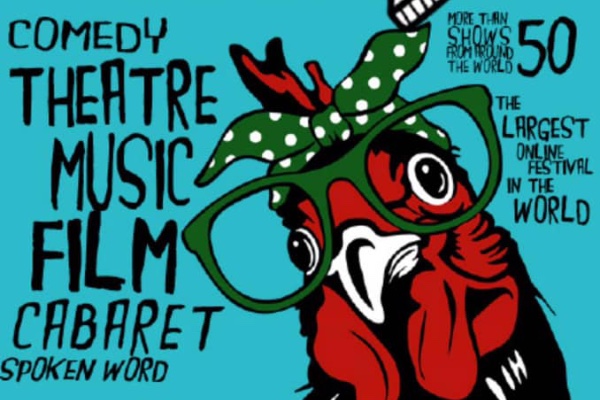 Thanks to The Space – one of Edinburgh Fringe’s premier venues, a whole host of wonderful shows from around the world are available online until the end of January. My first dip in was for two shows by Canadian performer Melanie Gall

Melanie is an operatic powerhouse of talent who in two shows recreates the musical world of four superstars – Edith Piaf, Jacques Brel, Deanna Durbin and Judy Garland. Piaf and Brel- The Impossible Concert gives Melanie comic and vocal scope to explore two of France’s most powerful lovers and performers who struggled  to achieve true happiness through stable relationships . The two never performed together or even met and Melanie alternates a quick-fire narration of their turbulent loves with keynote songs from their careers.

Brel, born in Brussels but achieving stardom in Paris ,  has fewer well-known songs as far as I’m concerned but Melanie gives us his biggest hit Ne Me Quitte  Pas- known in English as If You Go Away , and the enchanting Port of Amsterdam, which Bowie famously covered , about a drunken sailor who eats fish heads ! – and from Piaf’s repertoire we get MiLord, La Vie En Rose , Sous Le Ciel De Paris, and ofcourse No Regrets.

Melanie’s trained operatic voice adds weight and breadth to all these ballads and her quirky humour clearly enchants the small studio audience she’s recorded in front of.

In her second offering : Ingenue – which is a more dramatised performance about the life of Hollywood child stars Deanna Durbin and Judy Garland – we get Durbin going back over her career in a New York Times interview in France just after Judy’s death .

In this show, Durbin breaks years of silence in retirement  to kill fake news stories that she and Judy were teenage rivals and also that she was chosen to play Dorothy in Wizard of Oz ahead of Miss G. For me it was highly informative about just how gigantic a star Deanna was – much bigger than Judy –  and how their friendship did indeed become on and off as Judy felt inferior to her childhood star colleague.

The Durbin songs we get – often very short – allow Melanie’s operatic range to sparkle . I’ll Be Loving  You and Molly Malone are  enchanting and Say A Prayer For The Boys Over There tugs the heartstrings.   In a large auditorium this hour of supreme entertainment is touching, warm,  funny and reminiscent of Ute Lemper’s recent Rendezvous with Marlene.

And when the invisible reporter has gone Durbin tells us the truth about the part of Dorothy.  She wasn’t  unavailable as the popular story goes but decided to turn the part down after a successful audition because she thought it would destroy her friendship – something that over time happened anyway.

Watch both shows – they’ re free and look  out for other performances by Melanie Gall – she’s an incredible talent I hadn’t come across.

See theSpaceUK.com for all their online offerings which are streamed till 31 January.

I’ll dip into some more for you next week.