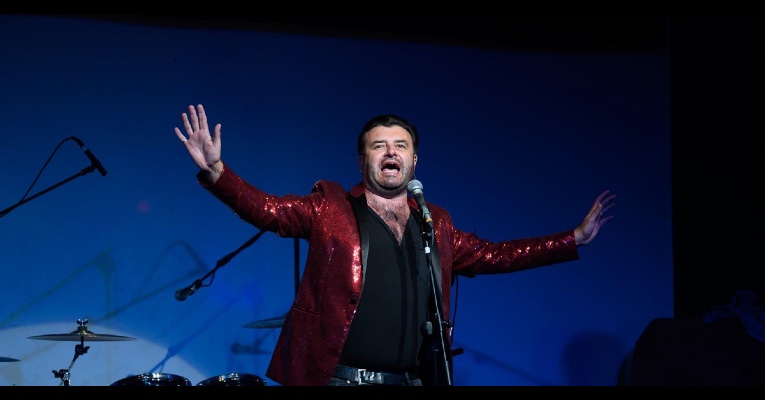 I can think of no-one better qualified to create his own Stephen Sondheim compilation show than Tim McArthur – actor, singer, director,  radio  presenter.

But with his quirky sense of humour McArthur is gender-switching to present an evening of songs sung by Sondheim’s leading ladies. Having cut his theatrical teeth as a dancer in pantomime, he went on to graduate to various roles as panto dames.

His quirkiness also showed in his portrayal of ex Labour Minister John Prescott in Blair On Broadway and also in Silence! A spoof musical of Silence of the Lambs!

He tells me he’s no stranger to maestro Sondheim having played the dark Sam Byck in Assassins, as well as The Baker in Into The Woods. “ I fell in love with Sondheim when I saw Follies at the age of 12 in 1987” he says. He’s also directed Into The Woods, A Little Night Music and Sweeney Todd.

For 3 years he cemented his relationship with Steve even more, hosting the regular cabaret shows put on by the Sondheim Society at London’s Phoenix Arts Club.

So you can bet he’ll have a unique slant on Sondheim’s Divas. Catch it  On 1 October for one night only at Clapham gay bar The Two Brewers. Tickets from OutSavvy.

And watch out for Tim’s production of Pricked – Based loosely on Sleeping Beauty –  this year’ s panto at the iconic Royal Vauxhall Tavern – more details later on Gscene.