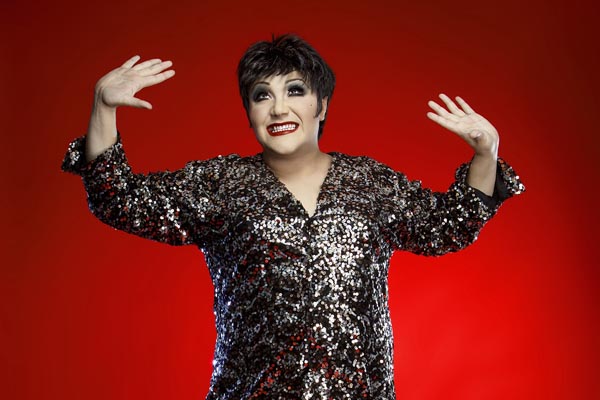 Trevor Ashley as Liza Minnelli, makes a welcome return to London with Liza’s Back! (is broken).

Trevor’s five-star comic tribute to the iconic Liza Minnelli, is playing at the Underbelly Festival for 6 performances only from Tuesday, June 27 to Sunday, July 2.

There is no doubt about it; Liza Minnelli is a true Broadway legend. But her appearances on the musical stage have been few and far between. So what would happen if Liza decided to perform all the great Broadway roles she never got to play, in one special night?

Liza’s Back! (is broken) explores the parts that Minnelli should have played over the last forty years – those great leading lady roles from Grizabella to Norma Desmond, and all others in between. Ever wanted to see Liza tackle Wicked? Then this is the show for you!

Direct from rehab, and live with a 7-piece big band, don’t miss Liza singing Broadway’s greatest hits, including I Have Confidence, Memory, Send in the Clowns, Le Jazz Hot plus her own classics Maybe This Time, Cabaret and New York, New York!

★★★★★ “Met by thunderous applause from his first entrance to last bow, Trevor Ashley as Liza is perfection”………Gay Times

Trevor Ashley is an Australian performer and cabaret artist.  His musical theatre credits in Australia include creating the role of Miss Understanding in the world premiere of Priscilla Queen of The Desert – The Musical; Edna Turnblad in Hairspray and Monsieur Thenadier in Les Miserables.

Trevor is the creator and star of a one-man Dame Shirley Bassey tribute Diamonds are for Trevor, which he recently performed to a sell-out audience at Sydney Opera House.

As Liza, his smash hit show Liza (On an E) has played seasons all over the world, including a week-long residency at the Vaudeville Theatre in the West End.

Events: TREVOR ASHLEY in LIZA’S BACK! (IS BROKEN)