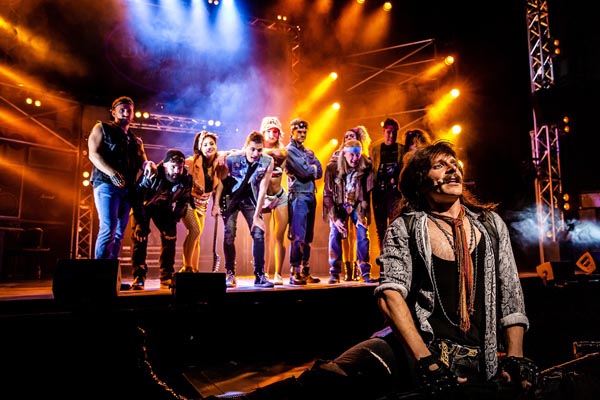 Final countdown on for Congress Theatre re-opening after major refit with Rock of Ages on April 8.

DIG out those stone-washed denim, add an extra-large can of hairspray to the weekly shop and start practising your best air-guitar as the biggest, baddest and loudest rock comedy musical Rock of Ages heads to Eastbourne’s refurbished Congress Theatre, part of Eastbourne Borough Council’s £44 million investment to create a first-class cultural, conferencing and sporting destination known as Devonshire Quarter.

Over 25 classic rock anthems and power ballads will be played loud and proud by an awesome live band.

Antony Costa from boy-band Blue leads the cast as leather-clad rock icon Stacee Jaxx. Set on the glittering 80s LA music scene, and packed with classic rock songs including; We Built This City, Don’t Stop Believin’, Wanted Dead or Alive, The Final Countdown and I Want To Know What Love Is this is one party that simply can’t be missed. Anthony has previously performed in the West End in Blood Brothers and at the Congress Theatre in Save the Last Dance for Me.

He joins Kevin Kennedy (Coronation Street, Chicago, We Will Rock You) who plays club owner Dennis, Zoe Birkett (Pop Idol) as dance club manager Justice and a cast of critically acclaimed performers including: Jodie Steele (Heathers) as a small-town girl with a big voice Sherrie Christian, Luke Walsh as bar-tender with a dream Drew and Lucas Rush as the scene stealing narrator Lonny.

Rock of Ages premiered on Broadway in 2009 and was nominated for five Tony Awards. It transferred to the West End and the big screen with star cast including Alec Baldwin and Tom Cruise.