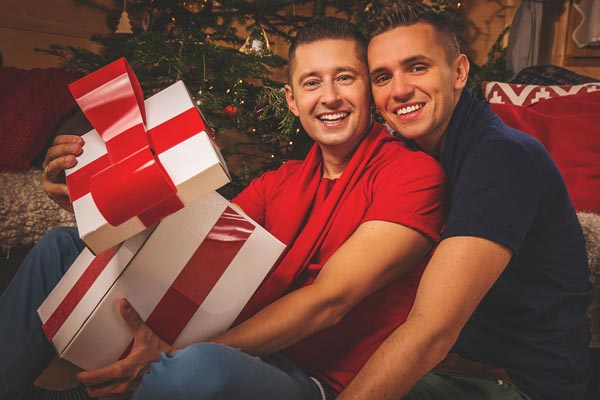 Polish gay couple Jakub and Dawid who rose to international attention last year after their lip-syncing video of Roxette’s Some other summer went viral, have recorded their own Christmas song.

Sung in Polish the song is entitled Pokochaj nas w swieta, or in translation, Love us for Christmas.

Thirty LGBT+ friends from all over Poland including vlogers, activists and some straight allies joined them to record the charming video that accompanies the track.

These included a gay Polish couple – Jack and Andrew who for safety reasons had moved to live in the UK with their two lovely kids – Brandon and Adam. They flew to Poland especially to participate in the recording of the video.

The video starts with nasty, negative quotes from Polish politicians about LGBT+ life, including: “This rainbow is a symbol of pervertion”, “It’s bestiality,” and “They need to be cured”.

Jakub explains: “During Christmas time there is a magic kindness between people. We just want to use this moment to draw people’s attention to our issues and help them understand us.

“According to recent research made in our country over 70% gay men and lesbians in Poland have experienced violence and aggression during the last two years so there’s many things that need to be changed. That’s what we try to do.”

In the song they sing “Love us for Christmas it is the right time – when love conquers hate and fear”.