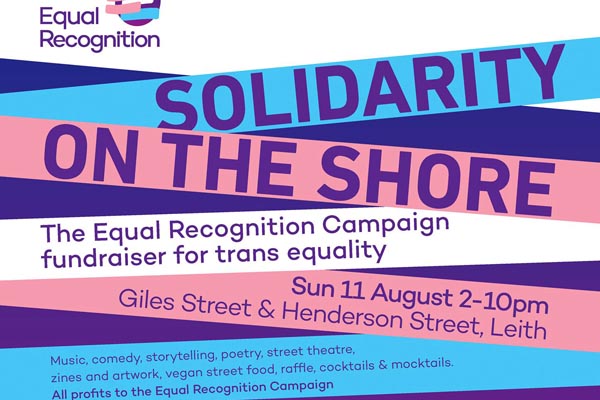 More than twenty performers, artists and authors will come together this Sunday, August 11 for a day of music, comedy, storytelling, poetry, zines and artwork, to celebrate and fundraise for trans equality.

SOLIDARITY on the Shore will take place on Giles Street, Leith, and in Harmonium Bar (Giles St) and Sofi’s Bar (Henderson St), from 2pm to 10pm.

It is organised by the Equality Network, Scottish Trans Alliance, Harmonium and Sofi’s, and sponsored by Absolut and Electric Spirit Co.

There will also be vegan street food and an outdoor bar on Giles Street.

Solidarity on the Shore is a fundraiser for the Equal Recognition campaign, which is campaigning for reform to Scotland’s Gender Recognition Act, to make it easier for trans people to change their legal gender to match the gender in which they live. The Scottish Government has proposed making such changes, and later this year will be consulting the public on a draft bill to do that. All parties represented at Holyrood had manifesto commitments on this at the 2016 Holyrood election.

Becky Crowther, organiser of the event at the Equality Network, said: “Showing solidarity with the trans community in Scotland is so important right now. Whilst trans rights and trans people are under attack online and in the media, we are so grateful to all of our contributors for standing with them to do something positive and celebratory.”

Jo Clifford, world-renowned playwright who is performing at the event, said: “This is a difficult time for everyone in the LGBTI and queer community, and it’s really important we find occasions to show our pride and our solidarity for each other. So I’m really happy this event is happening in the middle of the Edinburgh Festival, and really proud to be taking part in it.”

Ben Thomson, manager of Harmonium Bar added: “We wanted to team up with Scottish Trans Alliance on this because this is a positive campaign to be involved in. As a venue we value equality and diversity and we want to be a place that does good food, good booze and is open to everyone.”