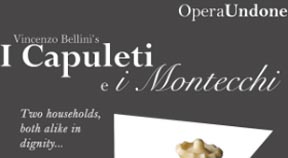 I Capuletti e I Montecchi

March 5, 2014
OperaUndone gave a sharp, intense, chamber performance of Bellini’s I Capuletti e I Montecchi last night.  Based on the original 13th Century manuscript that gave birth to Shakespeare’s masterpiece Romeo and Juliet, the opera is set in a medieval empire where the strict bonds of blood are exposed to the power of love and sexual attraction. This is chamber opera, deconstructed.

The Marlborough Theatre has an unforgiving acoustic and this on occasion hampered some of the lyrical delights of the music’s more florid sections, but this was more a distraction and the singers compensated well for the difficulties of the space.  Soprano  Susanna Heard as Giulietta was precise and subtle and  mezzo-soprano CN Lester  as Romeo were convincing in their amorous passion for each other and their duets were the highlight of the night, wrapping their voices around each other and the music with a perfect balance. All the singers have good strong performances and should be commended on their attention to detail. Lester also nailed the surly impulsive passion of the young Romeo.  It’s always a pleasure to be able to feel the singing reverberating in your own body and this was certainly the case in the intimate setting of the Marlborough, it’s been a long time since I’ve been that close to singers of such quality and volume. Stephen East’s crepuscular bass baritone voice resonating with commanding power though my skull really added another dimension to the whole experience of watching opera.

Ruth Mariner who directed this piece has brought a fresh approach to what I expected to be a rather stilted chamber piece (as I’m no fan of Bellini and his constricted musical language) so it was a surprise and a delight to listen to a show where the emphasis is on the singers rather than the rococo drama, and giving the voices the space to allow this convincing emotional narrative to shine. The story is much the same as the Shakespeare version (unsurprisingly as they both use the same source material) the main difference here being the role of Romeo played by a woman, although the trouser role is familiar to opera fans it can often add an extra modern interpretation to the drama.

Bringing such formal work into the round and dispensing with any fussy add-ons and just letting the music and singing ‘do it’s thing’ is both brave and engaging and allowed the audience to relax and the singers to bring the rich emotional undertones of the music to the fore. This was a persuasive performance done with conviction and thoroughly enjoyable all round.  It’s also unusual to see music presented in such a straight foreword way at the Marlborough which has such a reputation for avant-garde and experimental works, but it’s a beautiful venue to experince live classical music in.

Their voices blended well, even overcoming the rather limited acoustic of the Marlborough, I imagine in a warmer, larger venue they would be a real delight to listen to. It’s a pleasure to see such a diverse group of performers come together to present such an intimate and quality night of music.

Overall an interesting and well performed night in the presence of some quality singers who were obviously enjoying this production, if I had some criticism of the show it was that the lighting was too harsh for such a small room, the whole production would have benefited from a half dozen candelabras with candles dotted around the room. A nightmare for health and safety, I know, but an instant win for intimate ambiance, and if you’re going to deconstruct, why not go the whole way and stick everyone in black with some symbolic character identity.

These are mere quibbles from a spoilt elderly critic though as the strength and beauty of the combined voices of these accomplished singers moved me and gave us a night to remember.

For more info on this show or to see upcoming events at the Marlborough Theatre, see their website here: