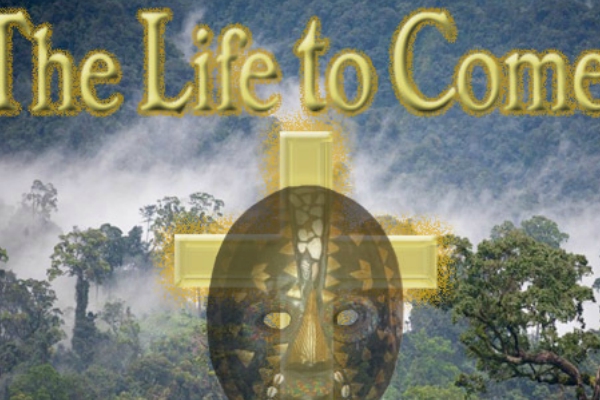 THE LIFE TO COME

This examination of male love, devotion to duty, missionary zeal, colonial hypocrisy and righteous entitlement of the white British middle classes of Edwardian England is a surprising piece of work.  Filled with suppressed passion, missed opportunity and tragic abandonment the opera examines the life of Missionary and Chief, Edwardian Christian Missionary Paul Pinmay and the African Tribal chief he came to convert, Vithobai, who experience an intense emotional and sexual bond which is forbidden by the English Church, although utterly acceptable to Vithobai’s beliefs and leads to misunderstanding, exploitation and murder, so far, so normal for Rodean on a Sunday afternoon.

Mander’s music is relentless, pulling like an emotional tide on the feelings, rising and falling, swamping and leaving us high and dry and then with a final tsunami of force shocking us into silence.  Fry’s libretto, struggling with the understated shame and muttering indignity of EM Forster’s short story ‘the life to come’ which was not published until two years after Forster’s death, does it’s best to explore and express this multitude of complex emotions.

The music a lyrical flowing narrative with echoes of early Britten and Copeland which filled the space and kept the emotional core of this piece steady and relative to the sometimes complex actions on stage. Often the music underscored and emphasised the subtleties of emotion that the acting failed to adequately demonstrate, there was some superb harp and strong pizzicato work and an energetic and symbolic use of percussion which was mesmerising. I suspect the actors played safe particularly in the anguish and regret of their sexual appetites and how they had given into them, but the music certainly didn’t. Giving full range to the regret and despair that a man of that time, space and apparent character might feel the next morning.

Martin Lindau playing Paul Pinmay gave us rich textured singing, expressive and honest, his acting sometimes melodramatic but his singing superb,  Themba Mvula as Vithobai – was the stronger of the pair, his lyrical voice shone with tone and emotion and he fully engaged and convinced his own personal confusion and patience. The supporting singers were all rather good, along with a rather large chorus who gave some excellent supporting singing and filled the space with the fervour and voices necessary to convince of the tensions between public and private lives in colonial Africa.

Never an easy subject – this opera is a potential minefield of racist, homophobic anti-religious attitudes – it is remarkable in its ability to carefully walk through such concern by keeping its focus on the personal & spiritual experiences of the characters.  Fry’s libretto is a little staid on occasion but it’s also refreshing to listen to the voice of such a staunch and eloquent atheist being applied to religious dogma and doggerel and the very real harm it has caused to the expression of love in all its infinite variety.   It’s the first time in a long time when I’ve  thought ‘you deserved that you sanctimonious  worm‘ at the inevitable nasty end of one of the protagonists. I felt for Vithobai’s betrayal.

So much opera is shot through with religious kowtowing and the corrosive, many tentacled self preserving privilege of white male hetrosexual christianity, its bracing to hear something which poses them as the dark side. The director Jonathan Butcher has performed a subtle piece of magic here and it’s strengthened as a piece of theatre for the boldness of vision displayed by the cast

This terrible ironic opera is a study of victims, regret and forgiveness, but ultimately it’s a cautionary tale about love:  As Vithobai says, ‘“I forgive you, I do not forgive, both are the same.”’