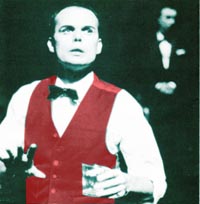 This classic Neil Bartlett/Nicolas Bloomfield music drama explores a shadow world of longing both familiar and alien. The year is 1958. The playwrights’ parents meet at a theatre in London’s West End to celebrate the playwright’s conception. They encounter a host of characters whose lives are linked to that of their unborn son in ways they could never imagine.

In its first outing since 1994, the acclaimed show, Night After Night is set to grace the stage of The Marlborough Theatre as part of Pink Fringe’s program of events this Brighton Fringe. A classic music drama written by Neil Bartlett in collaboration with the talented composer Nicolas Bloomfield, the show explores a shadow world of longing at once familiar and alien.

Night after Night, was first staged as a solo show upstairs at the Royal Court to an audience of fifty a night. The second version of the show took musical comedy, complete with tap-dancing chorus boys and a technicolour dream ballet, to the main stage of the Royal Court. The piece also featured unlikely and innovative casting, providing surprising new contexts for artists such as Francois Testory and Regina Fong. The solo version of the show will be performing for the first time in nearly 20 years at The Marlborough Theatre this Brighton Fringe.