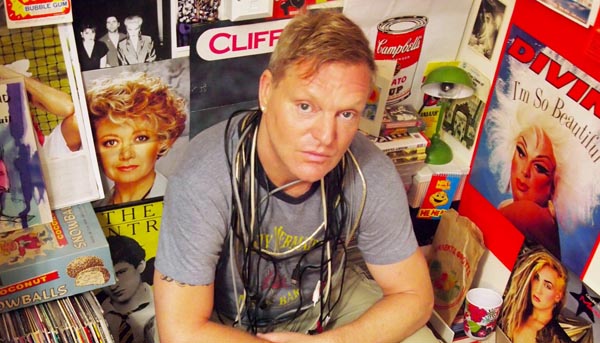 Erasure’s Andy Bell will release his sixth solo album Torsten, The Beautiful Libertine on March 4, 2016 and will be starring in a new musical stage show based on the album in London in March.

Andy says: “Torsten seems to me like a dream that has come true. I was told the piece was especially written with me in mind and I really believe that! So many aspects of the various songs resonate with parts of my life so I know I was there / am here. There is a melancholic beauty held within the songs and I think I’ve had enough heartache and painful soul-searching to do them justice but have managed to retain a certain naïveté in spite of these experiences. Torsten bears witness to these scars.”

The character Torsten is described as a “polysexual semi-immortal”. Over time, he has had many lovers and friends who ultimately he has outlived. That he himself survives is a bittersweet truth, but it is with an increasingly melancholic emotional distance from people.

The album is an evocative exposition of the mind, mirth and mania of an ‘everyman’ who finds himself in extraordinary circumstances.

The songs effortlessly combine pop and theatricality in their lush arrangements and Andy’s voice has never been so dramatically expressive.

He adds: “I love my Torsten … Even more now that he is becoming slightly unhinged…. Unraveling before our very eyes! I don’t believe that his spirit will ever be broken though; for all his lives & lovers & losses, the songs from the ‘Beautiful Libertine’ have a healing quality and a deep resonance that make you realise that he is putting everything into perspective and coping…just!”

Following the album’s release, songs from both Torsten albums will feature in the musical stage show Torsten, The Beautiful Libertine starring Andy Bell, Peter Straker and Lana Pillay at the Above The Stag Theatre in Vauxhall, London from March 2-27, 2016.

Andy Bell rose to fame in the mid-80s as the lead singer of famed synth-pop duo Erasure with Vince Clarke (Depeche Mode, Yazoo).

They are currently in their 30th Anniversary year and have, to date, sold over 20 million albums worldwide – 5 of which were No.1 in the UK; they have also had 17 Top Ten UK singles.

Personally, Andy took part in several charity recordings – many supporting AIDS related projects – and sang the role of Montresor in the opera The Fall of the House of Usher in 1991.

He released his first solo album Electric Blue in 2005, followed by a second, Non-Stop, in 2010. A collaboration with dance duo Shelter resulted in the album iPop being released in 2014.