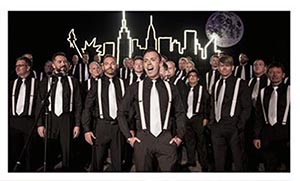 The Actually Gay Men’s Chorus returned to top form with a beautifully staged show I Got Rhythm, at St Andrews Church in Hove on Saturday, April 18.

THE church was packed, with standing room only and graced by the attendance of the Mayor and Mayoress of Brighton and Hove, Cllr Brian Fitch his wife Nora and Juliet Smith the High Sheriff of East Sussex.

After years of heady success, the choir has been going through a period of rebuilding during the last 12 months. It was wonderful to see them back to 40 voices strong and in great voice.

The main feature that always set them apart from the other LGBT choirs in the city was the wall of sound they produced when performing. They are a much more contained unit now, the voices have been stripped back and apart from a few isolated rogue moments their ensemble singing was first class, their sound beautifully rounded and they were clearly listening to each other, the sign of a mature group of singers.

As their sound has been stripped back, they have managed to maintain good light and shade during their performances and this was particularly evident in numbers such as Arthur’s Theme and Stepping Out which had a lovely light touch in their delivery.

Chorus’ highlights included a medley from Guys and Dolls, a tricky undertaking in the acoustics of St Andrews Church but pulled off with great style, and the New York medley which included rousing performances of New York a Wonderful Town from Bernstein’s On The Town, Lullaby of Broadway and the iconic New York, New York.

House of the Rising Sun gave the opportunity for the chorus to open up and sing big at the end of the first half as did their rendition of Stairway to Heaven, featuring great solo vocals from Joe Reed.

Maisie Trollette was the guest presenter for the evening and sang with the chorus in All That Jazz, Diamonds Are A Girls Best Friend and New York New York. He judged his patter perfectly for the occasion and was on great form with his vocals. For someone in his 80s his tone is quite astonishing as is his diction and intonation. His performance of I Won’t Send Roses from Mack and Mabel as an encore at the end of the evening was genius.

My highlight moments both included guest soprano soloist, Karen Orchin. Her evocative performances of Can’t Help Lovin’ That Man and If I Loved You from Rogers & Hammerstein’s Carousel showed Karen’s top notes off and her phrasing in If I Loved You was sheer perfection.

Soloists from the choir were given the chance to shine during the evening. These included Brian Gannon with a wonderful moody performance of Billy Joel’s New York Sate of Mind and David Harris with his stylish rendition of Cheek to Cheek.

Coady Green the choir accompanist gave an accomplished performance of Gershwin’s technically difficult, Prelude No.1 and joined with Christopher Wayne Smith’s for a thrilling performance of Alkan’s Saltarelle for four hands. A very risky choice in the acoustics of St Andrew but brilliantly delivered and bringing a huge roar of approval from the audience.

Musical Director Jason Pimblett is the cornerstone of this community organisation. He is a great trainer of ordinary voices, a talented arranger and The Actually Gay Men’s Chorus have the stamp of his talent all over them.

For encores, the choir sent the audience home with New York New York and Let it Go from Frozen ringing in their ears. This was a great evening out, listening to a great community choir.

The next opportunity to hear Actually Gay Men’s Chorus in concert is at their Pride show, Masquerade on Saturday, July 18 at St Andrew’s Church starting 7.30pm.