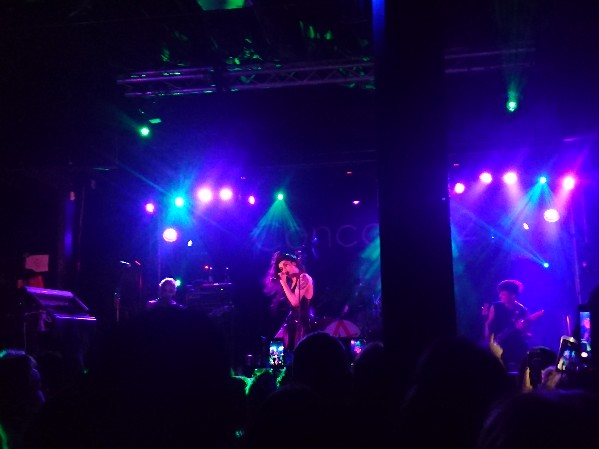 “MISS VANJII, miss…Vanjiiii,” yelled the punky drag singer known as Adore Delano. “I’ll personally start a riot if she isn’t on All stars four!” she howled as the crowd (whom had clearly watched too much of the show Rupaul’s drag race, from whence the singer originated) screamed back “Vanjiiiii,” in delight.

In her black swimsuit and torn fishnet, Adore Delano had the audience in a frenzy with her cheeky couldn’t give a flying – attitude as she spilled out her whole soul (and 2017 album) on stage tonight at the Whatever tour. One minute, throwing flowers in the crazy crowd, the next recalling the time her friend almost beat someone in with a trash can (calm down, he was defending himself), and then crashing into the track No school, she never failed to keep the burning admiration and absolute amazement from tearing us all to shreds (there’s a reason why her name’s Adore).

Butterfly, No school, My address is Hollywood, each song was a thrashing drive of whining punk rock solos and heavy, earth-splitting bass, sprinkled with the drag singer’s sweet and soul ridden pipes.

The angsty 27 club had us flashing back to the days of Kurt Cobain, with its thick and scratchy power chords and distortion that just stuck to every surface of the room, and tunneling its way through each wall until they gave way, and a crushing hand of distortion and energy was ripping through your heart. The occasional leap into the crowd had us gasping for air.

Between the songs she slipped a quick quip or two – anecdotes about her tumultuous time in school (as one of only two gay class mates in the school, she suffered some harsh backlash, but she’s from Azuza so she’s tough and fought off attackers). All of this said with a sweet smile and nervous tone though. For a punk rock band, the members all seem very sweet.

And just as quick as the show had begun, another song closed. The final notes of the impish DTF were still wringing in our ears, as the singer said her goodbyes and disappeared into the mist off of the stage.

That couldn’t have been it? No way. It’s only half ten.

“Encore, encore!” a perplexed crowd howled until the band crept back into the spotlights. “ok we’ll do one more,” she grinned as the shredding solo of Negative Nancy came bursting through the amps.

All in all, the night was over far too quickly. The crazy crashing of beats and thriving rhythms were far too thrilling to only be fit into an hour or two, and the humble yet punky Adore Delano (and band) will go on throughout the UK, bringing the feeling of solidarity and cheer to all, on their Whatever tour. Let’s just hope the American will be back gracing the stages of the UK again in the next few years.