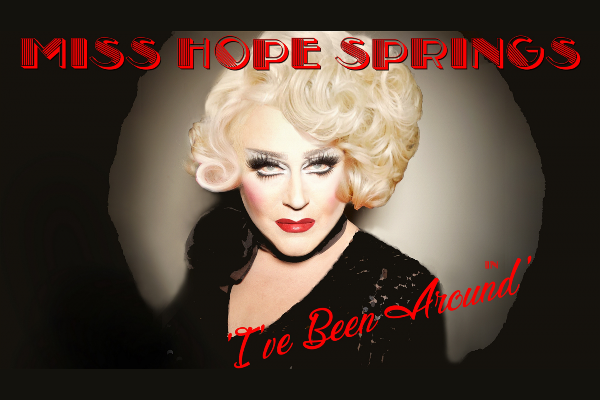 Miss Hope Springs is a homage to the great ladies of American showbiz, especially those who emerged during Hollywood’s Golden Age. What distinguishes Miss Hope from Greta Garbo and Monroe is that she never quite made it. Showbiz is her life, even if it hasn’t always been kind to her. We caught up with Miss Hope’s creator and custodian, Ty Jeffries, to discuss her latest comeback attempt.

Ty plays piano and writes the songs – Miss Hope Springs is character based comedy more than drag. Ty was mentored in his twenties by Vangelis. In the 90s he was a keyboard player in Billy Mackenzie’s Associates, and in 2019, as Hope, he was Marc Almond’s support artist at The Hammersmith Eventim Apollo.

Ty’s accent has a distinctive transatlantic twang and this carries through to his alter ego: “I grew up for a number of years in The States from the age of 6. I also lived in the US later in life for a few years so I feel transatlantic. I love America – or the America of my youth anyway.”

“My inspiration for Miss Hope Springs is kinda obvious. It’s the showbiz lady of a certain era. The never made it as opposed to a has-been. Difficult for me to say this now she’s playing the Wigmore Hall. She has sort of made it now. She’s having overnight success after forty-five years.” The transatlantic accent works especially well for Miss Hope. Many of the American actors of her era affected a transatlantic accent.

“I did a tour in the states in 2016 and I played her more British. She’d come to America in the 60s following Julie Andrews. Hope is interchangeable. In Rome she’d probably be Italian.” Julian Clary described her as “Tragi-comic genius.”

“My upcoming show is inspired by her travels, including Berlin and Dungeness where she lives with her husband Irving, and his hairdresser pal Carlos in a camper van. She says in the show ‘When my husband told me he was getting a little camper I thought – that isn’t possible.’ Irving and Carloss do her hair for her.”

“This show will include new and old songs. Some favourites will be in there. I’ve Been Around is the title song and it’s new. There’s also a song based on Shanghai Express called Shanghai Lily. That’s from her period when she was scrubbing the floor of a brothel in Shanghai.”

How has Ty coped with lockdown? “For me there was a weird synchronicity. At the end of 2019 I realised I’d been working solidly for nearly ten years. My mother passed away after a long illness that year. I just didn’t have the energy or enthusiasm to perform. It just didn’t feel like the right time to be on stage. I took on a few shows. By some extraordinary fluke, with all the lockdowns, I managed to do two shows just before we locked down. And three shows at Christmas – that tiny window when things opened in December; I did my three shows and then everything shut down again.”

“I was very fortunate. As I’m self employed I book myself. I’m not part of a big production that had to shut down. They need months to prepare. I’m a one man band so I was able to go back on stage and do shows at short notice. Luckily they sell out which is a lovely affirmation of my work. I’m going back to Crazy Coqs in Piccadilly Circus with 3 sold out shows in early June.”

When did he invent the character? “I think I started creating her when I was about seven. I was obsessed with old Hollywood growing up. I fell in love with Garbo, Dietrich and Crawford. Even at that age I used my sister’s Mary Quant makeup crayons. I’d paint my face on and get in touch with the more female aspect of my personality. Talking about gender and sexuality has become a lot easier in the last five years or so. When I grew up you had to squeeze yourself into one box or another. There weren’t many options. I came out at 16 – just ten years after homosexuality was legalised in this country.”

“Miss Hope Springs is autobiographical as well. I’ve been writing songs since I was a child. I had my first publishing deal with Elton John’s Rocket Music in the mid 80s. I am a serious songwriter. The big chart hits never seemed to come along. I don’t think that’s because of the quality of the songs, at least I hope not! People seem to assume if you do drag you do it because you can’t do anything else.”

Even after Drag Race? “I think Drag Race is a different kettle of fish – if I can use that expression! I came to drag as a writer and musician. I don’t aspire to be on Rupaul. I think it’s hysterical now that everyone looks like a drag queen. I saw the casting for a West End Show – all female cast. They looked like dolls! They make me think of cosplay. It’s all part of this wonderful drag soup… I’m a crouton.”

Is Miss Hope Springs here to stay? “I think she’s going to be around till I drop. I’ll probably be buried in full regalia.”

The character emerged ten years ago at Brighton Fringe and won Best Cabaret for that show. She also won the “Broadway World Award Best Cabaret Edinburgh Fringe” in 2019. “So this is a homecoming gig. I’ve been on my travels quite literally and come back to roost in East Sussex. Close to my beloved Brighton.”

Can Ty explain Brighton’s strange appeal? “I lived in San Francisco for a while in the 90s. I’ve always felt like Brighton is San Fran’s more petite cousin. It’s the spirit here. It’s wonderful. If drag is soup Brighton is a melting pot and all the better for it. I love it here.”

Miss Hope Springs has recorded an hour-long solo show for Pride in June at the world famous Wigmore Hall – links on her website.