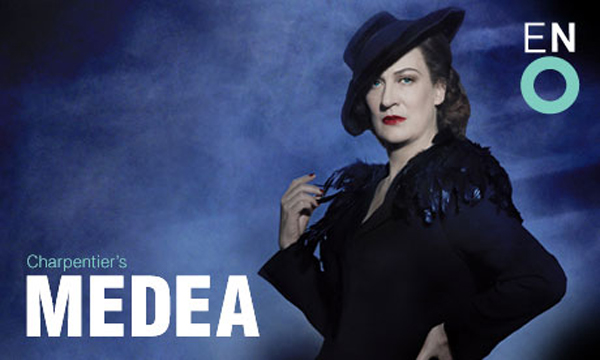 ENO’s new production of Medea directed by David McVicar  opened to a packed house at the ENO last night and was thrilling and engaging from the off. This most complicated of Greek myths was presented with a fresh perspective and allowed the much maligned Medea to convince us of her terrible vengeance. It was gripping, absorbing and shocking too.

Following Castor and Pollux, the English National Opera has began a revision of French baroque music and has allowed lost classics to be given new opportunity to shine, this new production of Medea is dynamic, spirited and gripping. You can read the synopsis here:

Sarah Connolly’s Medea is dark, convincing, powerful and utterly convincing. Her plunge from the tenderness of love, to abandonment and scorn rising to nuclear rage is a tour de force and was transfixing.  From tender mother to arm slashing sorceress she is magnificent, her fury sensually blinding, her betrayal compelling. Jeffrey Francis’s treacherous manipulating Jason is dull but sung well, he never convinced me he was a hero worthy of passionate love. Roderick William as Orontes was superb filling the role and auditorium with his resonate power.

Katherine Manley and Brindley Sherratt as father and daughter Creon and Creusa are a great pairing, making us uncomfortable in their suggestion of incestuous obsession. Sherratt’s tumbling, grasping trousers dropping desperation as he’s is driven mad by the summoned daemons a moment of humiliating horror.

Lynne Page has managed to choreography something with the dancers which fills the demands for French fru fru filling without jarring with the action. The poly-morphously perverse daemons and lithe leaping Sailors were fun and dance with panache, although there were moments where they could have been a little tighter. The full house was delighted by their first cheekily camp appearance. The resulting bump & grind/ rococo twirling mash-up meshes well and gets progressively darker reflecting the general tone of denial.

The costumes and vaguely French chateau set (by Bunny Christie) pulled from some uptight 1940’s, all neat tailoring and rolled bun hair, clean military tailoring and muted colours are sufficient to set the atmosphere of the times, a society on a war footing, status and purpose trembling on the edge of sensual abandonment as death is ever present. The dark and muted colour palate highlight Creusa’s shimmering dress of death and Medea’s own power suited presence.

There are hints of the movies (particularly Cupids entry in a red glittery Spitfire), of court life being a performance allowing the rather rococo demands of movements and action to be slotted into a world of hierarchy and deferment and the lighting –  Paule Constable- was brilliant this evening,  picking out details, masking motive, highlighting action and bathing the chorus in the kind of attention they deserve. I was thrilled by it.  The translation from Christopher Cowell was good, although sometimes pedestrian oddly avoiding any tie in with the suggested 1940’d period.

See Sarah Connolly sing ‘Such is the price of love’ from Medea here:

Carpenter’s music has few great set pieces but rather it ebbs, flows & floods and suddenly you are upon something exquisite and wonderful, these moments are hypnotic when they arrive.  Christian Curnyn conducting the ENO orchestra brought a subtle subdued tone from the pit, saving their own fury for the final act, Curnyn is a huge advocate of Charpentier’s music and you could feel his vibrant joy. As for the chorus, they were the best I’ve seen them, I could gush about how good they were, a highlight of the evening.

This might not be perfect, but it was superb and more than good enough to forgive the odd flaw; Miss Havershams writhing dusty imps and the endless gratuitous daddy-action played out on stage. When Medaes scorn and rage is finally unleashed Connolly becomes the centre of furious attention, her final horrifying condemnation as she rises into the night is an astonishing piece of visual theatre, backed up by the power of a tremendous voice used at full capacity, and a packed theatre holding its breath; it was stunning.