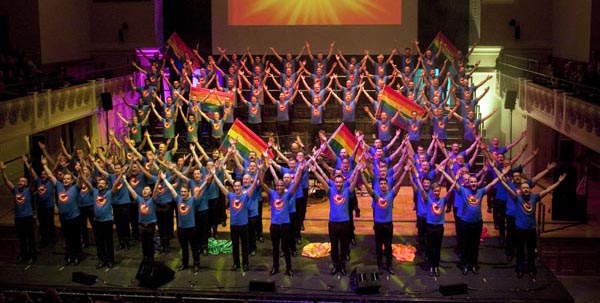 Proceeds from the sale of the charity single will be split equally between the Orlando Victims Fund, organised by Equality Florida and Galop, a London ­based charity that works to reduce LGBT hate crime in London and around the UK.

The LGMC performed the song at the vigil in Soho, London to commemorate the victims of the Orlando attack. Footage of the performance, which took place after a two minute silence, was shared online by news outlets around the world, receiving millions of views and shares.

This digital­ only release will be available to purchase or stream on all major platforms including iTunes, Amazon Music, Google Play, Spotify, Deezer and Tidal.

Just hours before the attack at Pulse Nightclub in Orlando took place, LGMC recorded Bridge Over Troubled Water in preparation for their forthcoming album, which celebrates the chorus’s 25th anniversary (due to be released in late 2016).

Following an unprecedented response to footage posted online from their performance at the Soho Vigil held to commemorate victims of the Orlando Pulse nightclub attack, the LGMC decided to release the track early to raise money for victims of this brutal attack and for victims of LGBT hate crime in the UK.

LGMC Artistic Director Simon Sharp says: “The attack on the Pulse nightclub in Orlando sent shockwaves through the whole LGBT community. The LGMC responded in the only way we could: through song. We were truly overwhelmed by the public response to our performance at the Soho Vigil and want to do everything we can to raise money for the victims of the Orlando attack and for victims of LGBT hate crime in the UK. We had recorded Bridge Over Troubled Water for our forthcoming album. It’s a song that has taken on new meaning for us as a chorus but we hope it sends out a message of love and support to all of our LGBT brothers and sisters and our straight allies across the world”

Chairman of the LGMC, John D. Carrion added: “The LGMC believes passionately that music has the power to heal and to inspire, to lift souls and to unite people in times of joy and sorrow. We understand how vital it is that the LGBT community has access to safe and supportive spaces – community groups such as the LGMC, bars and clubs – as a sanctuary. A place to express yourself and your identity. A place to call home. The Orlando attack was an act of hatred directed towards the LGBT community and we want to combat this hate with a message of love, hope and solidarity.

“The response to our performance at the vigil has been incredibly overwhelming and humbling for all of our members. We would like to take the opportunity to send our thanks to all those who shared this moment with us, and sent us messages of thanks and love. It helps spur us on to continue singing – for equality, and for those who have gone too early. We hope you will consider purchasing this single to send a message of support to the victims of this horrific attack”

Arranged by Fred Broom, with orchestrations by Simon Nathan, Bridge Over Troubled Water features the Orion Orchestra with Lana Bode on piano.

The LGMC’s recording of Bridge Over Troubled Water has been arranged and recorded by kind permission from Universal and distributed by Horus Music.