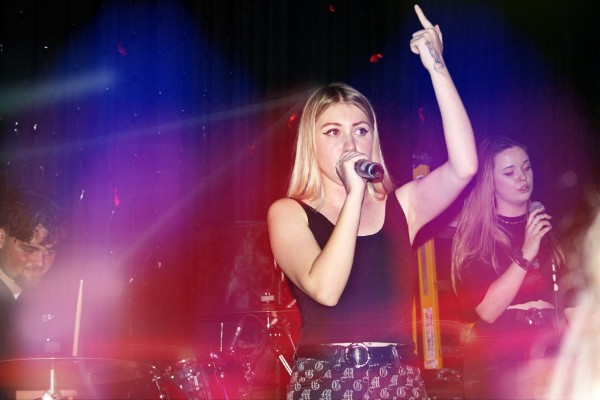 Hip-Hop fused newbies MIMAH introduce us to a new genre of melodical wonder, at their debut show.

“WHO wants to see me do a shoeie,” screams the tall singer, to a chorus gleeful roars from the audience.

“Right, I’ll need a beer and a shoe then. Anyone got one?” Sure enough a shoe – contaminated with who knows what, and a warm beer, appear from the bellowing audience. And then, honestly the weirdest thing i think I’ve ever witnessed happens. Jumping down into the jungle of people, he proceeds to drink the whole can of sweltering beer from the shoe. Yes, from the shoe.

“Come closer, I wanna touch ya. I am your saviour, I am your Jesus,” beckons the lad on stage, as the audience moves closer and closer. All around the sounds of light jazz and bright Valerie era Amy Winehouse guitars circle the room. I was already enthralled and the main act of the beautiful jazzy pop gig hadn’t even shown their faces yet.

Quickly the glistening sounds of relaxing funk pop merged with a Hip-Hopesque ideology, as the last support act left and the Too Many Zooz style seven piece MIMAH surfaced.

Subtle jazz enthused guitar chops and light drums unwind, reclining on the stage so that the fireball of a rapper can claim the limelight. Spitting bars faster than Road Runner sprinting the 100m at the Olympics, the young frontman walked us through the world of urbanised smooth jazz. But alas, this overflowing waterfall of words ran dry. Red in the face, the energetic rapper suddenly drew a blank. “I forget the words,” she melodically spills, refusing to let her lack of lyrical memory hold her back. “Just carry on.” Brandishing the heart of improvisational jazz, the band bravely continues on. But the battle for words was sorely lost, as the hopeful rapper’s flow came to a sudden halt of silence. Brief. Silence.

Picking up swiftly from the blunder the dark thunder of heavy bass licks and drums that run quick in a sweet R & B way change the humble room of hopeful onlookers into a wave of swaying bodies and relaxed faces, driving 8bit bass and keys play into a feeling of ease, with their minimalist reiteration, of songs known across the nation, with covers of a few and original songs, two, taking the band to a place of bliss, one which they almost missed, with the painful technology failure, that occurred. just. moments. ago.

They get into a rhythm – a more confident presence and a better performance, with the last three songs. Throwing in some offbeat ska guitar chords, unhinged tension building semintonal solos, and high-speed off the cuff lyrical magic, the group create this all round feel good sound that seems to resonate access the various ages that bare witness to their unique style – heck, we were all jigging along with the singer as she bounced eagerly about the stage. We couldn’t help it.

With gameboyesque 8bit bass lines, and delicate guitar chops, the jazz enthused group created wonderfully light and breezy summer day anthems. And, for a debut, their amazing melodic mix of playful funk guitar harmonies, rough and ready vocal spills, and sultry sax lines, offered us a refreshingly modern take on rap and instruments outside of the usual four piece lineup.

Don’t just take my word for it, check out a juicy snippet of their live show for yourself below….