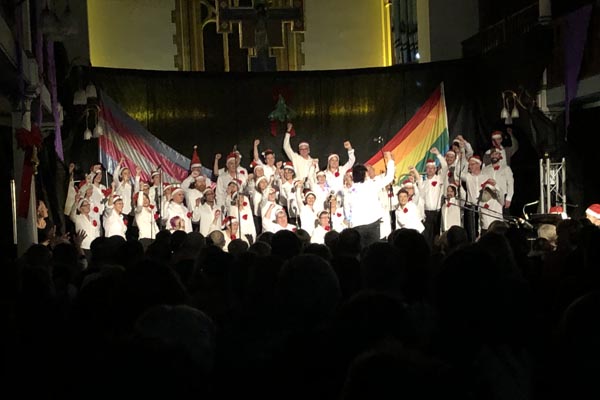 Rainbow Chorus thank supporters and advertisers for supporting them over the difficult Christmas period when their show Les Mistletoe had to be cancelled at the last-minute due to bad weather and rescheduled for January 12.

Following the very real consequences of Storm Deirdre — when flooding in the concert venue forced the Rainbow Chorus to cancel two hours before lights down, the chorus leapt into action to get Les Mistletoe rescheduled.

More flooding then ensued, but thankfully in the form of offers of help from many chorus members, volunteers, St George’s Church, LGBT Community Safety Forum, Lunch Positive and independent members of the public. The Committee soon realised there was a real desire to find a new date for the concert as soon as practically possible in the New Year.

A long list of thank yous was given on the night, so many in fact that it isn’t easy to remember to name everyone who contributed to the successful concert we held in January. However, the programme advertisers deserve special thanks for continuing to support this concert despite the delay, which meant that the cost of the programmes was still covered by this income.

Our advertisers for this concert included The Camelford Arms, Green & Healthy, Land Science, BLAGSS, The Crown pub, Liza O’Malley Photography, Justification Language Services, The Thomas Kemp and Beverley Barstow Painting & Decorating. A huge special thank you goes to our friends at Lunch Positive who stepped in to run our tea and snack bar raising a record total of £403.20.

The Rainbow Chorus is a charity and relies on the profits from our Christmas concert to raise enough money to subsidise the many community gigs we sing at and support throughout the year. Potentially loosing this revenue could have been disastrous especially as we refunded £500 in ticket costs for those no longer able to attend.

However, the Community came to our rescue with support and help from all quarters including heaters from the LGBT Community Safety Forum and a successful push to sell more tickets including support from other LGBT+ choirs. Our final audience figure was over 330, still significantly fewer than expected in December.

We were very grateful that the Mayor of Brighton and Hove, Councillor Dee Simson was able to reorganise her busy schedule and honour us with her presence. There was a real community feel during our performance and the audience came to the rescue when they were told about our losses and the financial impact of postponing the concert.

Our motto is Strength in Harmony and on this occasion we really felt the love and strength of the whole community. The Rainbow Chorus would like to thank those who generously donated £630 on the night to help fund our community performances in 2019.