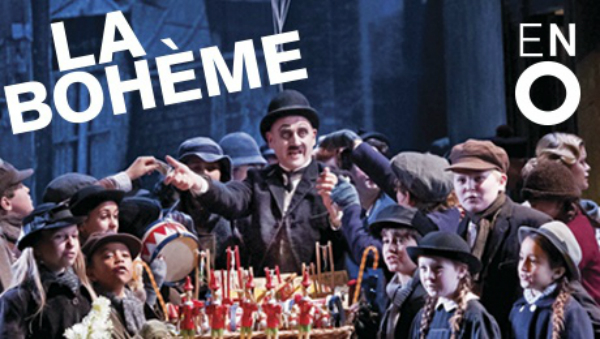 This is the second revival of Jonathan Milers by the book interpretation of La bohème and along with director Natascha Metherell the ENO have managed to give this smart and polished production a slightly rougher edgier feel than the last time I saw it, more grit and thus more real.

Never a great fan of La bohème I dutifully went along and tried not to sigh at the endless trauma that unfolds in this drama but tonight I was touched, not quite as much as the people around me who were moved by this evenings production, but the music was sublime and swept me and my cynical old self up into a beautiful elevated world of bliss.

Oleg Caetani conducted with masterful style last night, full of engine, pulling us effortlessly into the action and steaming on through with no time to pause, it was on occasion slightly overbearing but his relentless pace made the evening fly by and gave a really feeling of emotional urgency to the story. I was impressed with the orchestra last night, they gave their all.

Kate Valentine as Mimi was soft, sad and innocent lost in a confusing world and seeing real and emotional warmth, I felt sorry for her with her voice conveying desperate urgency well but she failed to convince me of her despair.  Gwyn Hughes Jones as Rodolfo was excellent and he pushed his voice gymnastically and effortlessly around the score and was impressive.

Richard Burkhard’s Marcello was warm and believable and his voice is pure and resonant,  but the real star of the night was  Angel Blue’s Musetta who was stunning, bringing believable nuance to this sometimes shallow role and being as sexy and knowing in her acting and look as she was in her singing.  She was exceptional, harnessing the power of the orchestra to her whim and ringing out across the Coliseum, just sublime, and each time I see her sing I want more.

Amanda Holden’s libretto was a bit of on the brutal side with some laboured rhymes which seemed over emphasised and unintentionally funny. The set of slowly revolving opened-out shabby apartments and streets striking the right note of early Brassai’s photograph of  20th century Paris and designer Isabella Bywater gets the muted pallets and shabby community feeling just right.

All in all a good night out at the ENO, something easy to access and understand, accomplished and nonthreatening and one for Puccini fans to revel in. A good show to take as your first visit if you’re interested in going along to opera this spring and it’s warm, inviting atmosphere of this quality and assured production is classic ENO at it’s best.

For more information or to book tickets see the ENO website here: