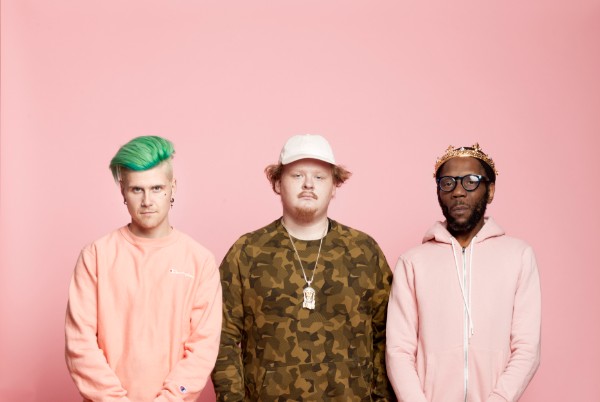 Leo Pellegrino, of Brass house trio Too many zooz, gives us the load down on how their song became the Official Pride single, making the move from busking to performing at the CMA awards, and collaborating with the likes of Beyoncé and Jess Glynne.

FROM SUBWAY to stardom is not the usual tale for a musician, but for Brass house trio Too Many Zooz that tale has become a wonderful reality. The New York buskers began as simple street performers, playing for tips on the subway. They created fabulously energetic remixes of the most loved pop songs, all with a jazzy dance ready twinge. Then along came the power of YouTube, propelling them into viral fame in 2014, and eventually leading to their collaboration with Queen bee Beyoncé herself.

“Basically Beyonce saw some videos of us in the subway and she decided to get us in the studio,” baritone saxophonist Leo explains. “We recorded over her country track daddy lessons and later that year she asked us to perform with her and the Dixie chicks at the CMAs [Country music awards] – A dream come true, she is one of the best performers of our time.”

With their inventive first E.P dubbed F note, after the term used to describe when a passer-by leaves their name and phone number in the tip hat of the busker, the group introduced their innovative subway music to audiences outside of New York. “We started busking because we needed to make money. Now we tour full time and it has been an incredible journey,” Leo says.

“Beyonce saw some videos of us in the subway and she decided to get us in the studio.”

Despite their quick ascension to stardom, and performing at the likes of CMAs, the band (whom would otherwise be known as Crack the House, if their name didn’t stick) still have a penchant for their old stomping grounds. “Honestly the subway is the best place I have performed. It’s sink or swim and you get to play in front of all types of people from all around the world. It’s a very unique experience for a musician,” says Leo.

The group, made up of saxophonist Leo Pellegringo, trumpeter Matt Doe, and drummer Dave ‘King Of Sludge’ Parks, emulate a new kind of genre, known as Brass house, adding freshness to classical instrumentation. Putting together some bracing dance beats and wonderfully nostalgic brass trills, the band makes the best of club music but with a twist. “Brasshouse is the energy of a DJ mixed with the communicative style of a jazz trio,” says Leo. And, as far as we know, the band are pioneers in this new style, with the members themselves actually coining the name for the new genre.

Their new style wasn’t just shared with Beyoncé and Dixie chicks, back in 2016, though. The trio (whose name was coined by a friend of the band, John Spencer) have recently released a track alongside pop songstress Jess Glynne – a cheerful banger, by the name of Warriors, that was selected as the official song of Pride for 2018.

“We made a remix of Warriors with KDA, and Jess really liked the song. She added a melody and lyrics and we all loved it. We were able to reach her through ministry of sound, our label in the UK,” Leo explains.

“I believe in universal love and have always felt that way growing up. I’m glad to see things have changed a lot but there’s still much to be done.”

Making a track with the likes of Jess Glynne is amazing as it is, let alone having it become the official song of Pride. And for Leo, that feat was incredible.”It felt great,” he explains when i ask about the achievement. “I believe in universal love and have always felt that way growing up. I’m glad to see things have changed a lot but there’s still much to be done.”

But how did an awesome song like that come about exactly? Well it’s a funny story really.

“We were out in San Francisco working on the album,” Leo tells me. “Were all big basketball fans, and this was during the end of the 2015-16 season, when GSW [Golden State Warriors] was just insane. We were just sitting in the studio, watching the pre game, started joking around like ‘man what if we just blew off this session and went to the game’… 5 minutes later we had 3 tickets and were on our way to Oracle to watch game 73.” Once the game had finished, the trio charged back down to the studio and, filled with inspiration, just created Warriors then and there.

“We started busking because we needed to make money. Now we tour full time and it has been an incredible journey,”

Their delightful Pride anthem isn’t the only new song on the horizon for Too Many Zooz. Harking back to their roots as a viral hit on YouTube, the band have also recently released a track that was built around the sound of a car alarm. Yes, you read that right, a car alarm. The creative crew have also spawned a viral challenge based around the song’s origins, dubbed the Car alarm challenge. Now how did they come up with that one?

“It was my idea,” Leo says. “Basically every time a car alarm would go off, since I was a little kid, I would sing a little song. Finally we decided to make a video based on that idea. The challenge was Matt’s idea.”

If the new track wasn’t enough, the trio are also in the midst of a tour in America – they’re probably performing right now, as you’re reading this. But what can we expect to see from tbem away from the subway?

“At every show you can expect lots of dancing and a high energy show. I love dancing! All self taught or YouTube tutorials,” says Leo.

Well, if you want to hear the fabulous sounds of club music through the incredible use of brass instruments, and see for yourself in person what goes on at their subway shows, I urge you to catch up with Too Many Zooz at their current shows across the US, or find them on their viral YouTube channel. Their music really is the most innovative thing to take hold of the internet so far.

If reading this interview with Too Many Zooz left you wanting to hear more about the creative crew, here are some exclusive fun facts about saxophonist Leo:

His dream people to perform alongside are: “Kanye West, Dave Chappell, Maceo Parker.”

His dedication to his craft is impeccable, as if he only had 10$ left in his pocket he would spend it on: “Saxophone reeds and I would start playing on the street to make more money.”

If he was only allowed to eat one meal for the rest of his life, the lively performer would chose: “Indian Food of some sort,” – he’d probably use the fire of the spices to fuel with him the energy he needs for all that dancing.

If he were a genre of film, he’d be: “Comedy but with dramatic moments, like Scrubs.”

If he wasn’t a musician, he’d be a: “Fashion designer.”

Without telling his age, the first album he remembers buying is: “John Coltrane, Love supreme.”

And out of all of the songs in the world, which one gives him goosebumps every time he hears it?