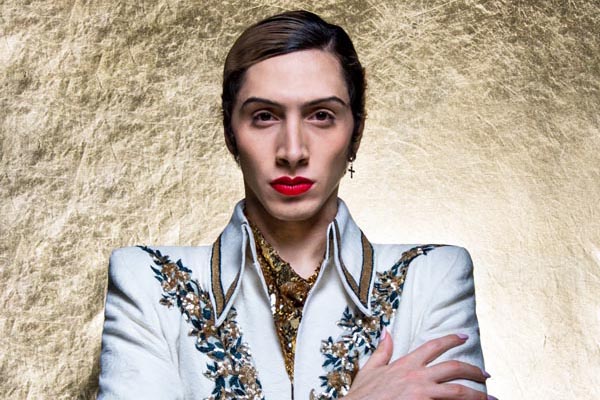 Pride’s Got Talent finalist Andrea Giovanni talks about being in the queerest competition around, androgyny, Rupaul, and the struggles of growing up in a strictly religious family.

ANDROGYNY. Music. Fashion. What do these things have in common? Andrea Di Giovanni.

The Italian singer-songwriter has taken his unique style and sound right to the finals of Pride’s got talent, and this weekend he’ll battle it out at the Charing Cross Theatre in London, in the hopes of slaying the house and donning the title of winner.

“I am so excited, I can’t wait! I’ve been trying to get to the finals for the past 3 years and never made it, so being part of it now is great!” he told me, brimming with zeal and zest. “It’s like having a second family. It’s so much fun, you meet other incredible, talented artists and we all do our thing with pride, which makes you feel right at home.”

As Rupaul once said:  “When the going gets tough, the tough reinvent,” and Andrea did just that. Moving from his family in Italy to London at just 18, the singer set his sights on stardom. He pushed to pursue his music seriously, after TV show exposure in Italy.

It was then that “I realised I had what it takes and decided to go full-time with it, with the first step being moving to London!” he enthuses.

Enrolling himself at the British institute of modern music (BIMM), Andrea lit the flame that would lead him to the stages of Pride’s Got Talent. And as a fellow BIMM alumni, I wanted to know what London’s school of music had to offer our star.

“Aw, BIMMers everywhere! Haha.” he joked. “I’ve spent the best years of my life at BIMM. I’ve learned so much about myself and my abilities, perfected my craft, found my own musical identity and made great connections.”

“There had been difficult moments […] being bullied and shamed for being different and feeling a lot of confusion due to my sexuality.”

Moving away from home at such a young age must have been difficult (let alone moving countries), but for Andrea, it was a necessary evil.

“I felt a sense of relief moving to London, I immediately had the feeling that it was the right place for me to fully discover and accept my sexuality, and therefore thrive as a person and artist. It was great regardless my choice of moving away, my family were supportive in the best way they could and I was surely loved.”

And thanks to the move, Andrea was able to immerse himself in an LGBT+ community for the first time. “It’s like a big family, we support and look after each other. It’s great and we are working hard to make every part of the community feel represented and respected. I’ve never really approached my community back in Italy, I was way too scared to do so!”

“Discovering […] my sexuality made me feel like religion itself would not accept me, and made me feel scared,”

But it wasn’t always plain sailing for Andrea. He grew up in a strictly Catholic family, and of course there were some issues the rules of religion imparted on him.

“There had been difficult moments throughout my teenage years though, such as being bullied and shamed for being different and feeling a lot of confusion due to my sexuality. I guess that for years it made me feel like I lived in a bubble. I would follow the rules but never really questioned why. God’s words and all of that. Growing up though, things changed and I started to realise that I didn’t quite like it, nor believe in it quite frankly, and I took a step back. Also, discovering more and more about my sexuality made me feel like religion itself would not accept me and made me feel scared, wrong, so I completely despised it.”

But that’s all behind him now, and with the help of drag superstar Rupaul, Andrea has crafted his fabulously musical crossdressing career. “Androgyny spoke to me straight away, I’ve always been the guy with feminine traits and mannerisms and it’s exciting, it breaks the boundaries of gender and it questions masculinity, or at least our society’s conception of it, at its max. Seeing the platform he [Rupaul] created and how brave he was while doing so, makes me so inspired. Also thanks to him and the art of drag, I’ve learned not to take myself so seriously all the time and to have fun with people’s opinions and judgements, because, at the end of the day, if you’re not having fun, neither is your audience.”

Now his look might be inspired by Mama Ru, but his music definitely isn’t. Andrea’s new single Our own way is out soon, encompassing everything from Whitney Houston to Mary J Blige, to Michael Jackson and Queen.

But what is it about? “Our Own Way is a song I wrote 2 years ago and it talks about a breakthrough moment in my life,” he explains. “At the time I was with a girl but realised that it wasn’t what I really wanted, so I decided to follow my own way and my own path towards happiness,” – a story many can relate to.

And when our little chat concludes, Andrea leaves with a parting gift we should all live by. A quote from Mama Ru that just encapsulates Andrea’s arduous journey towards stardom, and the struggles he’s faced along the way to becoming the fabulous musician a performer he is.

“Unless they’re paying your bills, pay them b*tches no mind.”

The final of Pride’s Got Talent is on Sunday, April 29 at Charing Cross Theatre, Villiers St, WC2N 6NL London, United Kingdom from 6-10pm.