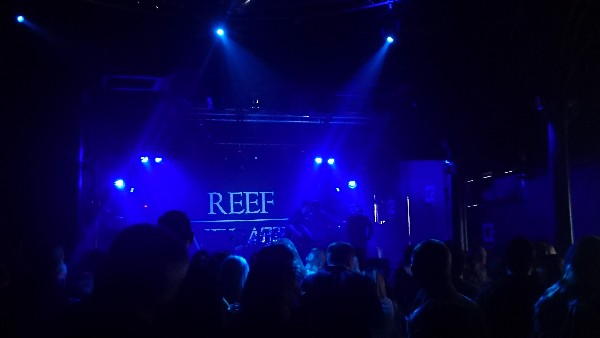 It’s a revelation, Reef are back with a new album and tour to boot. But is their roaring rock still as good?

“I JUST WANT to make a complaint actually,” the man on stage quips, dripping with sweat as he gasps for air, grabbing the nearest bottle of water. “I’ve been given a bathtowel. Who do i fire?”

When singer Gary Stringer first met bassist Jack Bessant back in college, they were just budding band mates and wannabe rock stars. The mere idea of them playing a sold out gig in the middle of Brighton would have seemed worlds away from what they could achieve. But soon after drummer Dominic Greensmith and guitarist Kenwyn House joined the rag-tag team of determined rockers, the dream came true, and the chart hitting alternative troupe known as Reef was formed.

Almost three decades, and a new guitarist by the name of Jesse Wood, later they’re still selling out tours and playing full to the brim gigs. And this one in particular i was lucky to see.

When i walked into the tightly packed venue, i wasn’t sure what I’d be in for. The room was full of sweaty excited fans, eager to test the band’s new album Revelation. Enthusiasm practically dripping off the onlookers and into a stuffy cloud of hope. It’s been eighteen years since their last album Glow was released, and with the addition of keyboardist Andy, the psychedelic band have transformed their old catalogue, sprinkling a handful of other spicy genres to the mix.

This time around, their sound has taken a softer turn, metamorphosing into mix of jagged rock in a sea of folky rhythms and soul fused vocals. Newbies Ball and Chain, Precious metal, and My sweet love, combine funky baselines and country guitar twangs with the iconic screeches of Stringer to form a weird sort of rock. It’s like the Bee Gees meets AC/DC, but in an old western saloon.

As the energetic singer Stringer and bassist Bessant jump about the stage and call out to the audience, the driving sounds of newer track First Mistake swim around the tiny room. Instantly the stain glass windows and decorated beams melt away into a dusty wooden bar with creaking walls and overhanging balconies that could split at any moment. With each twang of guitar, and smokey vocals, Reef paint a picture of an old rundown pub lost in the middle of desert in the wild west.

Ironically, a first mistake was more than just the name of a song. They’re veterans of the stage, but even the most experienced musician can’t be completely safe from the volatility of live performance. Pumped full of energy and vigor, Wood and Bessant start-up dreamy chorus of guitars and thumping bass, but perhaps too quickly as two seconds into I would have left you, out of time and out of tune, the song dissipates. Oops.

Laughs and headshakes erupt from the stage, and it’s not too long before the five piece are knees deep in a swamp pool of muddy guitar shreds, crashing drums and howling cheers.

Fan faves Naked, Stone for your love, Consideration, Yer old, and Place your hands on, just had to be part of the gritty gig, creating a perfect dichotomy between the band’s original rocky sound and their reinvention. But a sudden switch into throaty gospel ballard How i got over was a vanilla pod in an otherwise chilli drenched dish; sure it’s a featured cover on their new album, but in-between their classic crashing rock and funk jives, it sounded a little out-of-place. Especially when a flood of at least ten other people climbs onto the stage. Just like in their new album, the band recruited a choir (Soul of the city choir from Brighton this time) to help them sing along to their medley of past and present funky rock anthems. It’s a powerful sound to behold when not only the people on stage, but a whole room of sparkling fans sing as a wall of blaring voices along with nearly every track – even the new tracks were held up by the backing of fans.

“We actually entered the charts today at number ten with this new album” Stringer triumphantly cheers as the rest of the band smile back at each other.

Diving into the crowd, during title track Revelation, Wood and Stringer play up to the old cliché of a rock star, shrieking long winding solos and scratchy vocal cries. Aptly so; the song itself as an over the top old-fashioned rock track that applauses the rock and roll lifestyle. With painfully obvious lyrics (described by Stringer as “broad strokes“) and crunchy riffs, the track is a comic book style homage to touring and rocking out. At one point Stringer even pulls out his phone and snaps a picture with the sea of fans, hands up in a rock salute, truly living out the lyrics of the song. And when the band crumble of the stage after the would be final song, the crowd can’t help but howl in hope for them to return. Screaming “encore” and clapping out thunderous applause, the demand is high.

The beaming band mates strut back onto their pedestals and grab their instruments for a final farewell. The final song of the night. It has to be a good one, maybe it’ll be another newbie we haven’t heard yet. Or perhaps an old, old, old staple from way back.

“Happy birthday to you,” Stringer squawks.

Laughter pours out of him as his joke lands and relief is soaked in by the previously perplexed audience. And once again a thumping bass and stringy synth is filling up the room. “I’ve got something to say,” a smooth soulful voice belts.
It’s not long before the room overflows with the crowd’s gleeful “nah nah nahs” and the slow song closes.

The fans are reluctant to leave, hollering for yet another encore. But the show is done now and much to everyone’s disappointment, the blaring lights of the shabby room flick back on and burn the retinas.

From supporting The Rolling Stones to racking up a portfolio of Top 40 singles, the band have never been far from praise. They’ve been a well-loved good old-fashioned nineties rock band for almost thirty years, so they’ve not exactly new to the scene. But they’ve managed to keep their sound fresh, adopting funky baselines, country guitar twangs, and a wild rock and roll attitude throughout the lively gig. And it may have been eighteen years since their last entry into the music scene, but they’ve still got all the vigor and bombastic crowd jumping of their younger selves, just with a cheeky joke or two thrown in.