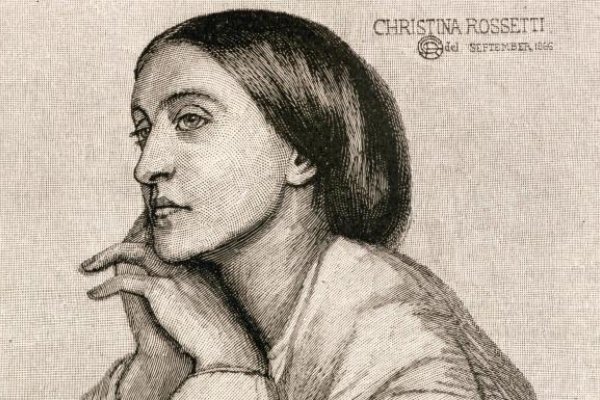 Christina Georgina Rossetti was a 19th-century English poet whose work ranged from Christmas carols to sensuous lesbian love poetry. A devout Christian who never married, she has been called a “queer virgin” and “gay mystic.” Her feast day is April 27 on the Episcopal and Church of England calendars.

She cried, “…Did you miss me?
Come and kiss me.
Never mind my bruises,
Hug me, kiss me, suck my juices
Squeez’d from goblin fruits for you,
Goblin pulp and goblin dew.
Eat me, drink me, love me…”

Some of these verses were set to music in a choral piece commissioned by the Sydney Gay and Lesbian Choir: “Heartland” by Matthew Hindson.

There is no survivng evidence that Rossetti was sexually involved with another woman,  her brother destroyed her love poems addressed to women when he edited her poetry for publication. Rossetti is included in “Essential Gay Mystics

Rossetti is also important to feminist scholars as they sought women’s voices hidden in the church’s patriarchal past.

Rossetti (Dec. 5, 1830 – Dec. 29, 1894) was born in London as the youngest child in an artistic family. Her brother Dante Gabriel Rossetti became a famous Pre-Raphaelite poet and artist. Encouraged by her family, she began writing and dating her poems starting at age 12.

When Rossetti was 14 she started experiencing bouts of illness and depression and became deeply involved in the Anglo-Catholic Movement of the Church of England. The rest of her life would be shaped by prolonged illness and passionate religious devotion. She broke off marriage engagements with two different men on religious grounds. She stayed single, living with her mother and aunt for most of her life.

During this period she served as the model for the Virgin Mary in a couple of her brother’s most famous paintings, including his 1850 vision of the Annunciation, “Ecce Ancilla Domini” (“Behold the Handmaid of God.”) Which now hangs in the Tate Britain Gallery.

Starting in 1859, Rossetti worked for 10 years as a volunteer at the St. Mary Magdalene “house of charity” in Highgate, a shelter for unwed mothers and former prostitutes run by Anglican nuns. Some suggest that “Goblin Market” was inspired by and/or written for the “fallen women” she met there.

“Goblin Market” was published in 1862, when Rossetti was 31. The poem is about Laura and Lizzie, two sisters who live alone together and share one bed. They sleep as a couple, in Rossetti’s vivid words:

Cheek to cheek and breast to breast
Lock’d together in one nest.

But “goblin men” tempt them with luscious forbidden fruit and Laura succumbs. After one night of indulgence she can no longer find the goblins and begins wasting away. Desperate to help her sister, Lizzie tries to buy fruit from the goblins, but they refuse and try to make her eat the fruit. She resists even when they attack and try to force the fruit into her mouth. Lizzie, drenched in fruit juice and pulp, returns home and invites Laura to lick the juices from her in the verses quoted earlier. The juicy kisses revive Laura and the two sisters go on to lead long lives as wives and mothers.

“Goblin Market” can be read as an innocent childhood nursery rhyme, a warning about the dangers of sexuality, a feminist critique of marriage or a Christian allegory. Lizzie becomes a Christ figure who sacrifices to save her sister from sin and gives life with her Eucharistic invitation to “Eat me, drink me, love me…” The two sisters of “Goblin Market” are often interpreted as lesbian lovers, which means that Lizzie can justifiably be interpreted as a lesbian Christ.

Rossetti was an important inspiration to a younger English poet who is also frequently considered queer because of his homoerotic themes: Gerard Manley Hopkins.  Fourteen years younger than her, he was a Catholic convert and a priest.  They shared a passion for religious poetry and met in person once, in 1864.

In 1872 Rossetti was diagnosed with Graves Disease, an auto-immune thyroid disorder, which caused her to spend her last 15 years as a recluse in her home. She died of cancer on Dec. 29, 1894 at age 64.

She wrote the words to “In the Bleak Midwinter” in 1872. It was published posthumously in 1904 and became a popular carol after composer Gustav Holst set it to music in 1906.  “In the Bleak Midwinter” continues to be sung frequently in churches, by choirs, and on recordings by artists such as Gscene’s favourite version from Annie Lennox  -below- (In The Bleak Midwinter taken from the album, A Christmas Cornucopia 2010), but has also been recorded by Julie Andrews, Loreena McKennitt, Susan Boyle and James Taylor. The haunting song includes these verses:

Rossetti herself may well have felt ambivalent about being honoured by the church or outed as a queer. She shared her own thoughts for posterity in her poem “When I am dead, my dearest” (1862):

When I am dead, my dearest,
Sing no sad songs for me;
Plant thou no roses at my head,
Nor shady cypress tree:
Be the green grass above me
With showers and dewdrops wet;
And if thou wilt, remember,
And if thou wilt, forget.
I shall not see the shadows,
I shall not feel the rain;
I shall not hear the nightingale
Sing on, as if in pain:
And dreaming through the twilight
That doth not rise nor set,
Haply I may remember,
And haply may forget.
Many thanks to the good folks over at QSpirit for their research & insight for this article. Q Spirit shares profiles of traditional and alternative saints, biblical characters, LGBT and queer martyrs, theologians, authors, activists, spiritual and religious leaders, mystics, humanitarians, artists, deities and other figures of special interest to lesbian, gay, bisexual, transgender and queer (LGBTQ) people of faith and allies and are always an interesting read.