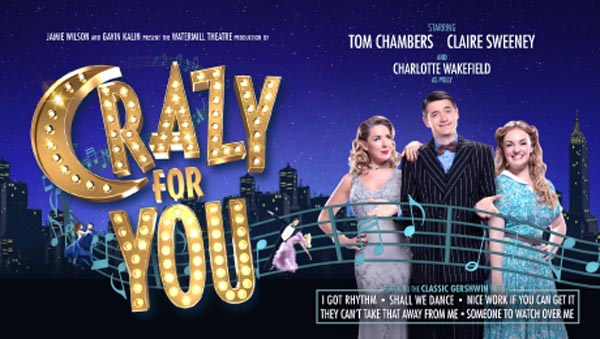 This show is exactly what an escapist stage musical does best – it’s highly entertaining, doesn’t tax your brain or your ethics and after boy meets girl, boy loses girl, boy gets girl again – we all walk out into the sultry rainy night happy.

WITH songs which are nearly 90 years old, from the genius Gershwin brothers, it is timeless and highly watchable.

Holby City star Tom Chambers dances, sings and wise cracks his way through the twists and turns of the plot and has a remarkable athleticism in his jumps, spins and even absailing down the scenery.

Claire Sweeney, a veteran of West End shows, gets second billing, though in all honesty her role as Irene, the jilted girlfriend is very much a cameo role. Where she shines is in her diva solo, vamping with her chorus boys – every inch a modern-day Ann Miller  – in the provocative number Naughty Baby.

This modern re-working of Gershwin’s show Girl Crazy, contains many of their top ten songs and they are cleverly interwoven into the plot. As the hard to get girl who finally succumbs, Charlotte Wakefield has a clear bright melodious voice and in her character as the Post Office mail delivery girl she is every inch an Annie Oakley look-alike.

You hear nowadays about the ‘triple threat’ of performers who excel as singers, actors and dancers – well we have one better – the ‘quadruple threat’ of men and women who can also play musical instruments – sometimes multiple instruments. It’s a joy to behold.

There isn’t a weak link in this multi-talented cast and Neil Ditt as the Hungarian impresario Bela Zangler wrings every bit of humour he can from the part. Highlight of the second act is when he comes face to face with Bobby who has been impersonating him and they mirror each other in a drunken song and dance routine to What Causes That?

Though the show has tremendous pace, the dialogue and storyline go flat for about 20 minutes where nothing much happens apart from an irrelevant cod – English comedy routine in Stiff Upper Lip.

But that apart, we know all will end happily and the entire company – who are playing a theatre company in the story unite to sing and dance round the happy couple as they descend on a crescent moon from the flies.

A fantastic evening to lift the Brexit blues.

Crazy for You is at the Theatre Royal, Brighton until Saturday, June 2.