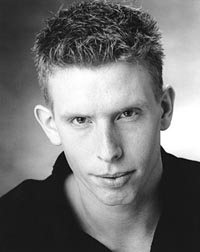 The Guy Lewis Music Memorial Show is on Monday, June 24 in the Oxford Suite at the Metropole Hilton Hotel on Kings Road, Brighton.

Guy died suddenly earlier this year. The father of twin boys, he was awaiting the birth of his daughter, due a week later when he was taken unexpectedly ill with chest pains and he passed away in the early hours of January 9 at Worthing Hospital. A blood vessel in his heart had burst.

Guy was an accomplished actor and in 2001 appeared at Brighton’s Theatre Royal in Ladies Night, the male strip comedy play and his love affair with Brighton began. He met his wife Hanna while touring with Ladies Night and the couple moved to Brighton in 2003.

Guy was a great friend of the commercial gay scene in Brighton. He always attended Brighton Pride and supported local gay venues becoming friends with many  local entertainers. Indeed, Davina Sparkle appeared as special guest at the couples wedding reception in 2007. Other artists joining Davina on the bill for the Memorial Show at the Metropole include:

The show will be presented by the award winning writer, actor and director, Greg Ashton.

The date chosen for the memorial show is on what would have been Guy’s 35th birthday. All proceeds raised on the night will go directly to his children, Maz, Frank and Baby Ela.

For more information and to book tickets: CLICK HERE:     http://www.whataguy.org.uk/