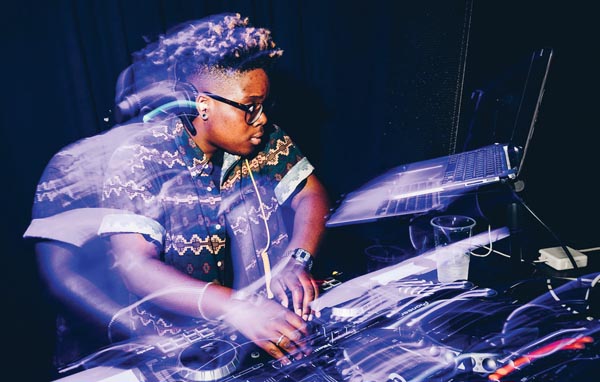 Still tingling from her fabulous sets at Brighton Pride, Queenie catches up with the marvellous Jumeau…

Hello – how are you? I’m great, still riding the high from a fantastic Pride weekend with some really fun sets and already thinking about how to make it even bigger and better next year.

What does your name mean?! It’s French for twin and pronounced joo-moe. I’m a non-identical twin, and not French, but I love French house and electro, so I always try to incorporate or reference it in my sets.

Where can we hear you playing? At Gal Pals (galpals.club) alternating between Brighton and London almost every month, and on mixcloud (mixcloud.com/jumeaudj) for live sets and teaser mixes.

What are you playing these days? I oscillate between summery sets with a lot of Brockhampton, Chloe x Halle and Doja Cat, and heavier electronic sets with some TEPR and Brenmar thrown in the mix.

Any other projects going on? I recently started a radio show with my girlfriend called 1-800GALPALS on Platform B (platformb.org), we chat about queer pop culture and play our favourite songs by women and non-binary musicians on the 3rd Friday of every month. I also run pop-up video game events (healthbarbrighton.com), we curate our nights around different themes and create spaces for people who don’t traditionally consider themselves as ‘gamers’.

Fave song ever? Way too hard to choose! Fave at the moment is Americans by Janelle Monae. My mornings for the last month have begun by listening to Dirty Computer in its entirety – by the time I get to Americans, I’m feeling euphoric and ready to take on the day.

Best ever gig and dream gig? I’ve been supporting Mykki Blanco on his UK shows recently and every gig has been AMAZING. It’s really great warming up the crowd for such a high energy show. I love to play anywhere the audience has no requests and are just happy to come along for the ride.

Tune you wish you’d never played! Mind is blanking here, probably because I’ve erased the memory out of sheer embarrassment and tried to move on with my life after probably clearing the dancefloor(!).

Guilty pleasure?  I don’t believe in them! If I love a song, I’ll love it (and play it) loud.

Describe yourself in three words! I asked the internet because I got way too introspective with this, they came up with: Nerdy, extroverted, cutie; Queer, here, needabeer; The biggest babe; Squirrel, Ipswich, kettle; You contain multitudes.