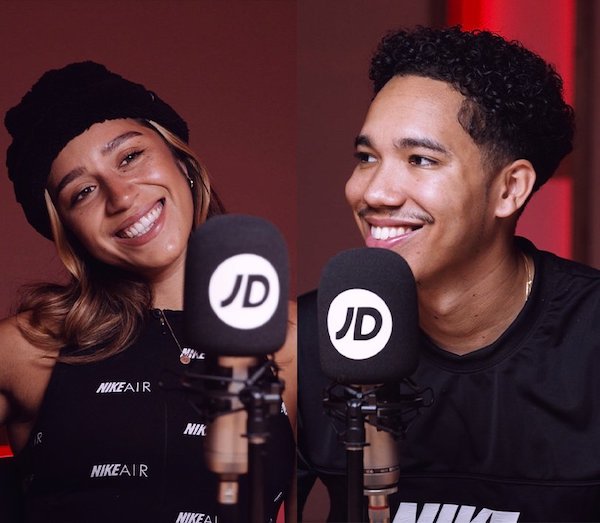 LGBTQ+ singer, songwriter and footballer Chelcee Grimes, who is openly bisexual, recently spoke to Chuckie Online on the latest drop of JD’s In the Duffle Bag Upfront podcast about her rise to fame.

The 28-year-old, who juggles producing music with playing football for Fulham Ladies, articulated to Chuckie her first big break in the music industry – sharing songwriting credits with Kylie Minogue. Chelcee said: ‘Kylie Minogue is making a new album, I was 21 at the time, like what do I know about Kylie Minogue, like how am I going to write songs?

‘I was in Denmark and it was the first flight I had out paid for as a songwriter – like we’re paying you to come over – and I was just like, oh my god I’m a real songwriter!

‘(I) got off the plane and I was in the deadest hotel, it was literally sink, (and a) bed and I had to slip past my suitcase to get to the bathroom – it was terrible.’

Despite the inauspicious start, Chelcee came into her own once she got into the recording studio: ‘(I) went in the session, met them all and they had just done everything from Britney to Pussycat Dolls back in the day, all just proper hit hit hits, proper pop royalty like Scandinavian producers, and I just said okay play the track.

‘Then I wrote this tune called A Million Miles and the lyric was ‘feel like I’m a million miles away’ and I was just talking about being far from home, but I made it like it was a love story and they were like this is great.

‘I done (sic) it in like 20 minutes, it was one of them – anxiety, nervousness – it just all came out and I just wanted to prove I was good.’

After the high of positive feedback from the music producers, it was time for the song to be sent to Minogue to record her part, which Chelcee recollects: ‘Then, that night, I was in bed and they sent it to Kylie and she wrote back and they were like she’s going to cut it tomorrow and I heard the song the next day!

‘I went back to the hotel and just played and she was singing my song and I heard my backing vocals and I was like – Kylie Minogue singing my tune!’

Chelcee Grimes has since gone on to have songwriting credits on over 20 songs with artists including The Saturdays, Dua Lipa and Jonas Blue, and is also is a presenter on Match of the Day spin-off show MOTDx.