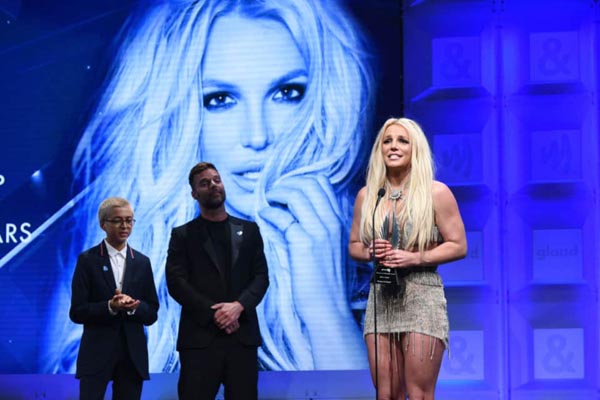 The Princess of Pop wearing a revealing, creation by Giannina Azar and a pair of Christian Louboutin heels was presented with the prestigious honour by latin super star Ricky Martin.

During her acceptance speech, she said: “Society has always put such an emphasis on what’s normal, and to be different is unusual or seen as strange, but to be accepted unconditionally and to be able to express yourself as an individual through art is such a blessing.”

Adding: “Events like this… the one we’re at here tonight… show the world that we are not alone. We can all join hands together here and know that we are all beautiful. And we can lift each other up and show our gifts without hesitation.”

Britney will perform her complete Las Vegas Show, Piece of me on the main stage at Brighton Pride on Saturday, August 4.

The full list of winners and honorees are as follows: