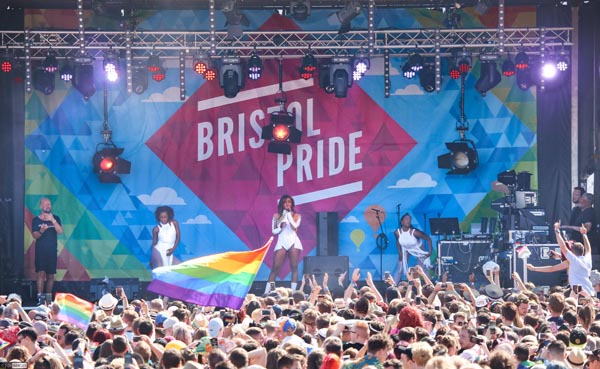 THE move will see the festival double its capacity after welcoming 36,000 people to the event last year.

With the increased venue size, Pride will introduce new areas and activities, including a new stage in partnership with national lesbian publication DIVA Magazine, as well as expanding current festival areas. Other new additions this year will include a giant circus tent in partnership with Bassline Circus with performances throughout the day, a wellbeing and mindfulness area, and a silent disco.

The team at Bristol Pride will be celebrating their 10th Anniversary in 2019 during which time Bristol Pride have become one of the largest LGBT Pride events in the UK and one of only four Pride’s in the UK to be named in the Global Top50 of Pride festivals worldwide.

As part of the celebrations, the team are inviting previous acts to perform again at the festival including Sophie Ellis-Bextor, Sonique, NINA, Saara Aalto, and Bristol’s own Dr Meaker.

Whilst many more acts are yet to be announced others set to perform on Pride Day include Boney M, X Factor finalists Four of Diamonds, Hazell Dean and Ru Paul’s Drag Race’s Peppermint with fellow star Manilla Luzon performing at a special Friday event at clubnight ESDR.

The festival will again run for two weeks with events taking place across the city from June 29 until July 14.

As well as the ever ‘pup’ular dog show, events include theatre performances at the Wardrobe Theatre, with Riot Act on Thursday, July 10 marking the 50th Anniversary of the Stonewall Riots.

The fortnight of events also will showcase the return of the Pride Circus Night at Circomedia, Milk Poetry and the Pride film festival Queer Vision at the Watershed. Alongside some of the best LGBT+ films, Queer Vision will host a special evening partnered with IRIS Prize, where Bristol Pride (and the audience) select a winner for their Best of British short film competition.

Unite Students have been confirmed as the headline sponsor for the festival for a third year in a row.

Daryn Carter CEO of Bristol Pride said: “I’m really excited for Pride 2019, we’re celebrating our success but also securing our future. It’s been an incredible 10 years and we’ve rapidly grown to a Pride that consistently named as one of the biggest and best in the country, as well as being named in the Global Top50.

“Moving to The Downs not only means that we can deliver a bigger festival for everyone wanting to attend but allows us to develop new festival area and present our biggest and most diverse line-up to date.”

Richard Smith, Chief Executive of Unite Students added: “Understanding and valuing diversity amongst our employees and students alike has been instrumental in creating homes and workplaces where there is room for everyone. That’s what makes us particularly excited to be the headline sponsors of Bristol Pride for the third year running. By helping support the expansion of the festivities to the new site, we are securing the opportunity for even more people to get involved and join this important event. We can’t wait to make the 10th birthday the biggest celebration of inclusion yet!”

Pride Day will start with the Parade march in the city centre, which last year saw 12,000 people take to the streets in a colourful, display to showcase visibility for the communities and to declare loudly and proudly that hate and prejudice doesn’t belong in Bristol. A message more important than ever this year following a 23% increase in LGBT+ hate crime in the region.

£7 Supporter Wristbands for Pride Day are available now from the Bristol Ticket Shop.

As well as helping keep the festival going they offer dedicated entry lanes on Pride Day and great money saving rewards such as money off the onsite bars all day, discounts or freebies with festival food traders, £1 journeys with Bristol Ferrys and other offers including 20% off G&Ts at the Watershed Café Bar, 10% off spirit and mixer at Christmas Steps. Super Supporter, Day+Night, 10th Anniversary commemorative fast track Fabric wristbands and donation entry options will all also be available.