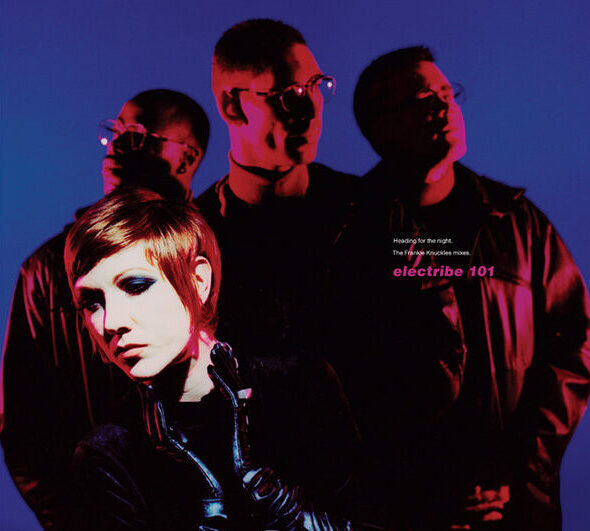 Billie Ray Martin has one of the best voices in popular music. She describes herself as “a kid from Hamburg’s red-light district, who wanted to be a soul singer, but ended up playing repetitive machine music, while still trying to be a soul singer”.

She came to prominence as the lead singer of Electribe 101. They scored a number of hits, most notably Talking With Myself. Their debut album is a house classic that went on to inspire many artists. She went solo after the first Electribe album, scoring a massive hit with Your Loving Arms.

Best known for her electro music, Billie has released several albums, including Deadline For My Memories and The Soul Tapes. She has many new releases to come, including never before released collaborations with Frankie Knuckles and the long awaited second Electribe 101 album. We caught up with her to find out more.

1. First of all, how have you coped with lockdown?

I suppose, like everyone, I do my best. I feel more isolated from my fellow human beings than ever before, and not through physical distance, but from witnessing unquestioning attitudes, attacks on those who have differing opinions, acceptance of loss of rights, as long as oneself is favoured in the equation. It is now becoming harder to cope, but sanity keeps me afloat.

2. The Frankie Knuckles remix of Talking With Myself is a true house classic. How did you come to work with him?

Initially I suppose it was set up by the record company. But it soon became clear that Frankie put his heart and soul into any remix work he took on and hence a relationship developed. Frankie was a big fan of our group and even contacted the record company asking to remix ‘Diamond Dove’. They refused. Later when I went solo he would be there, waiting backstage for me at 6 in the morning at Twilo, to say hi and offering to remix my songs. A beautiful soul.

3. The Heading For The Night remixes he did sound amazing. How come they were never released?

I understand that ‘Inside Out’ had not been successful enough as a single (radio one had not scheduled it), and hence Electribe 101 were not considered as a priority group any longer.

4. The Electribal Memories album has become iconic and the sound is so distinctive. Did that album fulfil your artistic vision?

I don’t think we ever thought about it. The sound and production came naturally to us and when it was done, it was done. I remember the guys sending me their final mix of the album version of ‘Inside Out’ and I called and said that I felt it was the most perfect thing they’d done thus far. With this album it was almost as if they’d waited for the right situation to put their combined skills to use and create something new and fresh, and, while I can’t speak for them at this point, I can say that I feel proud of our effort.

Listening to the songs now, as well as the second album, which was never released, I can feel what skilled musicians they were, each in their own right. This is all pre-automation era, so mixes were done live, even on stage. Les played the bass live with such skill and precision, Brian is such a wonderful sound engineer and producer, Joe the electronic heart of the group, adding incredibly melodic and yet sexy hooks and sounds, and Rob, an incredible keyboard player, songwriter and beautiful human being. All this came together.

5. Will the second Electribe album finally be released?

It will. Later this year or early next year. Pressing plants are backed up for vinyl and are not taking orders right now. I’m overseeing the mastering right now and the artwork is done. Lewis Mulatero, the original photographer of the first album, sent me all the original negatives from New Zealand, so the artwork is a dream come true.

6. You have a big, soulful voice. Is it safe to assume you were heavily influenced by American soul growing up in Germany?

Actually I was not, funnily enough. I became aware of soul much later as a teen. I grew up listening to whatever was on the radio and to my grandparents and parents Beatles and Elvis records, Rolling Stones, German Schlager, you name it. This is why I’m so rooted in 60s music, because they had that record collection. But there was no soul. That came later, and when it did, it blew my mind.

My first Soul Music records were Martha Reeves and the Vandellas and The Supremes. What more do you need? Well, much more followed of course. But in my early Berlin days I was actually more listening to Cabaret Voltaire, Throbbing Gristle and many others. When Soul entered my universe I knew I had to figure out how to combine the two. That’s how all that started.

Perhaps. Personally I never really saw the total connection between disco and house. Of course people like Bohannon and others did already pioneer repetitive, hypnotic beats and suggested house, so there was a progression there. But I feel that disco is unapologetic joy, whereas house brings darkness. Fingers Inc: Break down the walls for instance. Robert Owens and Larry’s production introduced something that had never been done before. Real life issues, real life feelings expressed, honestly and unedited. Master C&J: ‘Face it’ and ‘Living In The City’ – it doesn’t get darker than that. Incredible stuff. Both Disco and House are equally justified of course, and equally brilliant.

8. We’d love to see you on stage. Any plans to hit the road when travel restrictions are eased?

I’m currently working on a few albums so I’m recording and constantly organising sessions. But who knows…. Maybe when the first of those albums finally comes out I have time for some shows.

9. You have a crowdfunding project for three new albums, the next one being “Gezeitenraum”. What kind of music can we expect and how can people get involved?

The fundraising link is on my website. It’s music played with a group of musicians, and I guess you could call it ambient, jazzy gospel… I don’t really know what it is. The album is about my childhood in Hamburg, gentrification, destruction, re-building, homelessness, freaks and hookers (of course!). The recording was delayed of course, but can now hopefully commence.

10. Your dance records have always been popular on the gay scene. Do you have a particular affinity with LGBT+ audiences?

Of course! I grew up in the red light district of Hamburg, where I already had contact with all sorts of different genders, gender-mixes, and people. Half of my family wasn’t sure if they were male or female, so for me it was always normal to not even differentiate or place any importance on what gender someone was.

As a musician I would be where I am, maybe I wouldn’t even be around at all if it wasn’t for my LGBT+ audiences, which have been just beautiful throughout and continue to show up for me.

11. Which of your solo albums are you most proud of? (I particularly like The Soul Tapes!).

I am proud of the Soul Tapes, because it was fun producing and mixing it. I felt like I could do it suddenly. Of course Jon Tiven had produced the initial recording session so there was already a basis to work with. I do love most of those songs too. But I’m not sure I can say which recording I’m most proud of. I like some better than others.

Electribe 101 – Heading for The Night – The Frankie Knuckles Mixes are available now.