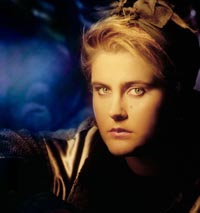 Iconic Diva Alison Moyet has been added to the main stage lineup for this years Brighton Pride on Saturday August 3. Alison Moyet made her name in Yazoo with Vince Clarke before moving on to a successful solo recording and acting career in the West End.

“Alison Moyet is a true Icon and a hero to many LGBT people. We are so excited to be able to confirm such an amazing legend for Pride 2013. We will be announcing even more thrilling acts in the run up to what is already looking to be the best Brighton Pride line-up ever!”

This year the main stage returns as a focus on Preston Park. Alison Moyet will be joined by the original lineup of the Sugababes. Mutya, Keisha and Siobahn have reformed the original Sugarbabes line-up and are performing under the name MKS with brand new material being written for them by none other than Emeli Sande. This is one of the most anticipated reunions in years.

“MKS will be performing some new material as well as some of The Sugababes biggest hits live on our fabulous main stage. I can’t tell you how excited we are about it, they are truly an iconic pop act and are going to make a huge impact on the day.”

Already confirmed for a completely unique DJ appearance on the main stage is Paloma Faith!

“I’m delighted to be able to announce Paloma’s appearance this early in the planning stages, she will be doing a DJ appearance unlike anything you’ve seen before”

Popular girl group Stooshe are also joining the line up. Their single Black Heart was one of the largest selling and airplay records of 2012. She will be joined by multi Brit award winner Ms Dynamite who will be performing her signature sound of R&B, grime and UK garage. Ms Dynamite has had recent chart success with DJ Fresh track Gold Dust and Katy B’s Lights On.

Pride wouldn’t be complete without some boy band action and so far the line up in this category includes Britain’s Got Talent finalists The Mend and up and coming boy band Class A have been confirmed.

Other confirmed artists joining Alison Moyet, MKS, Paloma Faith, Stooshe, Ms Dynamite, The Mend and Class A on the main stage include; Lindy Layton, Stacey Jackson and disco legend Hazel Dean who will be helping create a day for the city to remember.

The anti is being upped this year in the Women’s Performance Tent with the appearance of lesbian Icon Horse and X-Factor’s Lucy Spraggan.

“With are thrilled with the line that has been organised  so far for this year Pride, and with so many other major acts to announce anyone who takes advantage of the £12.50 early-bird ticket offer this year is getting themselves a serious bargain!

Brighton Pride is administered by a CIC Company formed to manage the 2013 event. It’s Directors are Paul Kemp of Aeon Events Ltd. David Hill of E3 and Dulcie Weaver.  £1 per head for each ticket sold is ring fenced for the Rainbow Fund to distribute through their grants program administered by the Sussex Community Foundation to LGBT organisations, along with any profits after bills and expenses have been settled after the event.