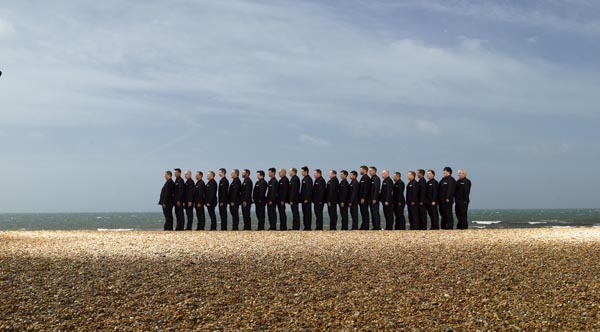 The Actually Gay Men’s Chorus will be performing on Friday, February 22, during February’s inaugural B.Right.On LGBT Arts Festival celebrating LGBT History Month. They will be singing some of their favourite numbers including original arrangements of Albinoni’s Adagio with guest soprano Samantha Howard and Rodriguez’s Concerto De Aranjuez. There will also be a selection of songs from the hit musical Moulin Rouge featuring One day I’ll fly away, Come what may and Roxanne.

The first part of the performance will culminate in a teaser for their forthcoming April show The Music Of The Night – A Celebration of the West End which will be performed at St Andrew’s Church, Waterloo Street in Hove on April 26 and 27.

In part two the boys will be launching their new album Somewhere For Me which includes songs by David Bowie, Radiohead and Nine Inch Nails to  name a few. The album was recorded last year for Universal Records and will be available at a discounted price on the night.

Brighton and Hove’s Actually Gay Men’s Chorus was set up in 2005 with the specific aim of providing a place where gay men could socialise, have fun and develop their vocal and musical skills in a unique environment and perform to the public while raising money for local LGBT charities.

Members benefit from the wide ranging experience of the music team led by musical director Jason Pimblett, their ‘home’ is the beautiful grade one listed St Andrews Church in Waterloo Street, Hove, where they rehearse and present many of their performances.

The chorus are proud to be members of the Actually Community Interest Company, a not for profit organisation that manages them and other community projects including the recently established and hugely successful Actually Gay Women’s Chorus.

For more information about the chorus view: