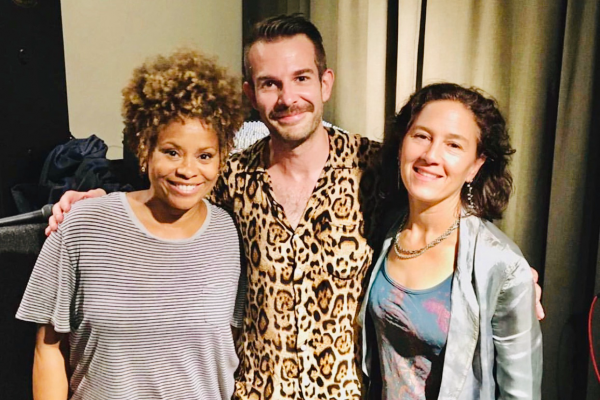 A Bright Light for the LGBTQ Community.

Gay pop sensation Bright Light Bright Light has released a video online for his new track This Was My House and it could not have come at a more welcome moment. Featuring legendary Madonna Backing singers Donna De Lory and Niki Harris the new single was already whipping up high expectations following its release on digital platforms last week but the new video seals the deal.

Filmed in New York before much of the world went into lockdown, the video kicks off with Bright Light (x2) otherwise known as Rod Thomas stuck in his shoebox apartment with nothing but his phone and a glitterball stuffed between his legs for company. Sound familiar? It should. The song itself is an ode to disappearing gay venues and a sense that we don’t know what we’ve got ‘til it is gone. Hot on the heels of the announcement this week of the permanent closure of Legends, ‘This Was My House’ should strike a local chord with the Brighton and Hove LGBTQ community:

‘This was my house and I was not supposed to worry about it
This was the place that I was not supposed to fear’ Welsh born Thomas sings across a familiar 90s style house vibe, and in the video whilst locked inside he reflects upon fre-er times as we cut to visions of nights out surrounded by the colourful characters we will recognise so well from our own scene.

Thomas, who last year supported Cher on tour and before that Erasure, has always cited Madonna’s tour documentary In Bed With Madonna/Truth or Dare as his introduction to gay culture, it is then fitting that the Queen of Pop’s long-term singers Niki and Donna should accompany him on this track. Were our Pride events to be running – this would be a dance tent favourite, were our bars open this would be blaring our onto their spring terraces. And although written as an homage to the LGBTQ nightlife, the song itself will strike a sharper note during our current lockdown in response to the Covid-19 pandemic.

But this is not an opportunity to wallow in our collective sadness; This Was My House is a total banger and the video an uplifting shot in the disco ass just when we needed it most. Rod Thomas we salute you.

When this is done…. We’ll see you on that dancefloor:

…..This was my house and I was not supposed to worry about it’.