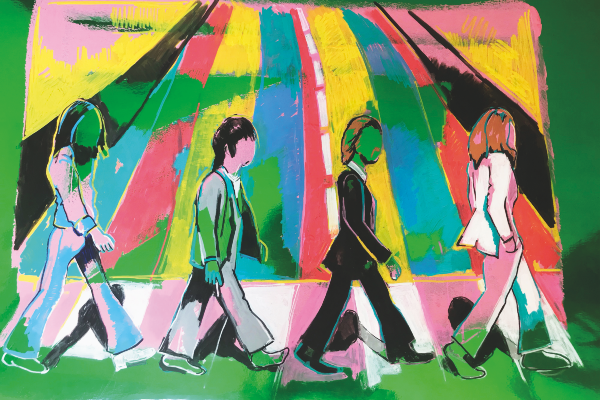 Shocked by the plight of Poland’s LGBTQ+ community, London’s Zebra One Gallery and artist/activist Lapinus Morgan will launch the Love Is Not An Ideology (LINAI) exhibition raising vital funds for the Polish charity Federacja Znaki Rownosci.

They tell us all about it…

The show features works by artists including David Hockney and Andy Warhol as well as pieces by a host of contemporary artists, including Pure Evil, Not Quite Bob and Ben Youdan, standing together in support of Poland’s LGBTQ+ community.

The images will be sold via the Hampstead gallery’s website with 100% of monies raised going to the charity, which provides psychological and legal help, arranges support groups, cultural events and works to integrate the LGBTQ+ community in Poland.

“Love is real. It’s not important who you love, but that you love.”

Nearly 70% of the LGBTQ+ community in Poland has been subjected to physical, sexual or verbal violence and less than 4% of these people felt safe enough to report such incidents to police, leaving 70% of teenagers within that community grappling with suicidal thoughts.

Half of Poland’s municipalities have declared themselves “LGBT-Free Zones” and violence towards these communities has dramatically increased.

The President of Poland, Andrzej Duda, pledged in his recent campaign to “fight LGBT ideology” in Poland, referring to the LGBTQ+ community as a “Rainbow Plague”.

The Polish Minister of Education and Science, Przemyslaw Czarnek, has compared LGBTQ+ people to Nazis, saying: “There’s no doubt that LGBT+ ideology grew out of… the same root as Germany’s Hitlerian National Socialism, which was responsible for all the evil of World War II.”

“I was born in Poland, and was subjected to homophobia, but I was lucky enough to start a new life in London, where I was welcomed and shown that being gay is nothing to be ashamed of.

“Realising that I could do something from London, I decided to work with Zebra One Gallery on a charity art show – since funding is not existent from the state – to raise vital funds for the charity and awareness of what is happening in Poland.

“The overwhelming response from diverse artists to this project shows the LGBTQ+ community in Poland that they are not alone. We are starting a movement to fight for the human right to love without fear.”

Gabrielle Du Plooy, Zebra One Gallery owner, added: “This show will celebrate love in all of its forms and all of the money raised from it will allow that love to continue, without shame, terror or persecution.”