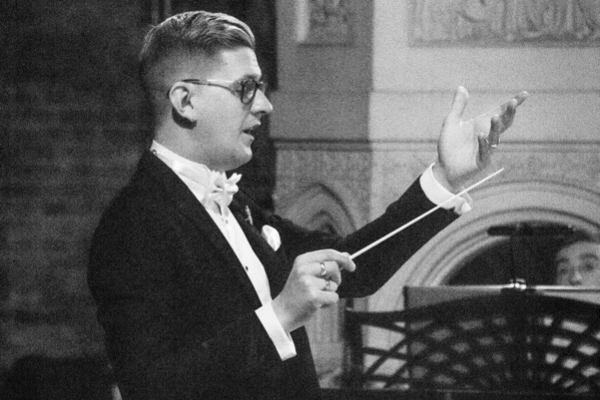 A lifelong interest in music started for Samuel Cousins when, aged 9, he played the innkeeper in his school Nativity play and sang the solo in O Little Town Of Bethlehem. His father was a guitarist in a band so he had a natural interest, learning to play by ear the theme song to Titanic on a little keyboard.

Money didn’t run to piano lessons, but in the school choir the boy treble soon became a hearty tenor and won a bursary for singing lessons with Jayne Bagnall, who taught the young boy to sing opera. But Samuel – always candid – admits he was intimidated by music and couldn’t get to A-level standard. But he started putting together concerts – a skill he has certainly perfected.

He joined the local Frinton Musical Theatre company, playing  lead roles and directing shows. Then it was off to the University of Winchester to study drama and more choral work,leading to becoming conductor. “ I learned conducting by doing it”, he tells me, his earlier practising at home with chopsticks now coming in handy. While we chat he gives me a quick demo- the first beat has to be a down movement, the second across the body, and the third forming a triangle. “I learned it all on the fly and by asking others if I was getting it right”. And June Boyce-Tillman at Winchester guided him in how to conduct.

Soon under his leadership the 12-person choir had 180 members and had its own barbershop group and orchestra.

He cut his teeth on productions at Brentwood’s operatic society, appearing in Guys And Dolls and then playing the lead Bobby in Sondheim’s Company, and donning roller skates for his role in the Drowsy Chaperone. At the time he was working for Nationwide and upped sticks and moved to Brighton in 2013.

As he succinctly and honestly put it to me: “I got married and then divorced and after the split I came here to get away from it all. I did a lot of partying and then across a crowded bar met Norman”, his current partner. After 6 months without a job, Samuel became a shop manager for housing charity Shelter. He is currently a retail area manager for the charity.

Reluctantly joining the tenor section of Actually Gay Men’s Chrous, he was interviewed and became its Musical Director. That was 5 years ago. “Our reviews said we were about a wall of sound.I wanted to create a path to that wall. The choir at that time did loud and fast. I love story-telling.. the story behind the song”.He added colour and dynamics to the choir, admitting that their technique had always been marvellous.

”Music should be accessible to everybody – I’m an ex-council estate boy leading one of the best choirs on the south coast. My view to new members is come and have a go”. He also admits to having what he calls “ crazy ideas, big ideas – I have to be reined in sometimes”.

The year 2019 was particularly hard for the choir-  three members died- the last just a short time before a planned concert. “We decided to go on with the event- it brought us together and we realised how much we love and trust each other”.

Lockdown hit the group particularly hard.”We were so aware of the isolation of single men in the community.It killed us having no music”. That’s one reason their first concert after Lockdown 3 included the song “ Till I Hear You Sing “ – the lyrics say it all about the void of not having music in your life, Samuel tells me.

Apart from his energy and devotion to music, there’s something quite distinct about Samuel. He is 100 pc deaf in his right ear.”It happened when I was very young and I’m still not sure why”.He has always heard music as he does now, and when teaching/rehearsing  he has the singers more or less in the round to help him. In performance he wears hearing aids in order to better amplify the sounds, but it only feeds into his left ear.

What advice would he give to a young Samuel? ” Don’t be afraid. Don’t say no”.

Does he have musical ambitions? “I love what the chorus does and I’d like to do a full major work with them, an orchestra and other choirs”.Well, who’s to say Samuel’s ambitions won’t be realised one day – I for one am sure they will be.