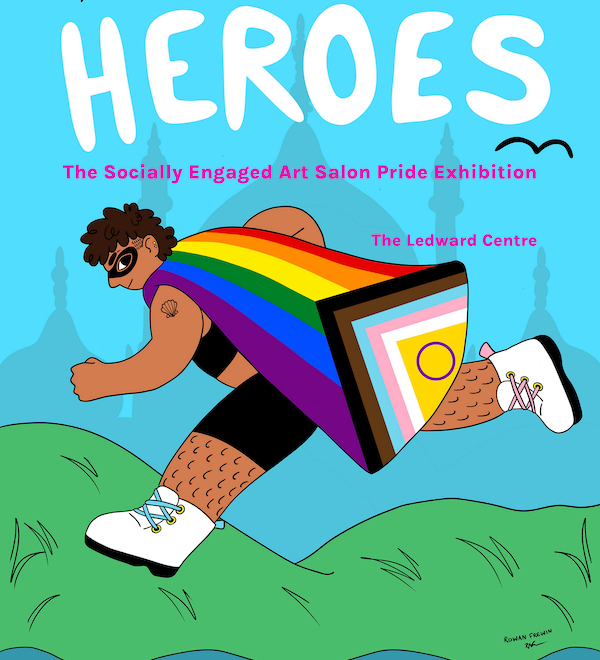 Socially Engaged Art Salon (SEAS) tell us about their new Heroes exhibition, which opens at the Ledward Centre on Jubilee Street, Brighton on Friday, August 5 from 6pm with performances from Ebony Rose, Sammy King and Ben K Ellis.

There are not many LGBTQ+ heroes featuring in heteronormative culture. LGBTQ+ youth find it difficult to find role models and for QTPoC it is even more so. The Heroes exhibition at the Ledward Centre, curated by SEAS and with local artists and activists, runs till September 25 and aims to change this picture. Far from being a commercial endeavour, it aims to communicate, educate and activate.

The diverse body of work in this exhibition includes the life stories of historical and contemporary LGBTQ+ people in the UK and further afield told through illustrations, films, texts, and photography.

Two extensive projects are concentrated on the history of trans persons. Trans People in History series by the artist and activist Fox Fisher is a series of illustrations and short texts about trans people from the 16th century to today. Fox says that they were motivated to create the work because: “As a trans person who transitioned in my late 20s I love learning about trans people in history.

“I’m fascinated with how the trans and gender non-conforming people featured in this exhibition found a way to be themselves in previous centuries. All of the people I’ve featured have overcome tough situations and major obstacles, carving out their own path and living their life to their fullest potential.”

Another project in relation to trans history is an illustrated zine by Rowan Frewin that looks at trans and non-binary figures even further back in history in history from Roman times to Stonewall Riots. The zine started as an illustrated presentation they made for Comics Youth as part of an ongoing project and now is available in printed format.

Similar motivation to explore the history of marginalised people and to tell their stories, initially to her children, drove Annis Harrison to create the project, Mamma’s Black Heroes. The ongoing project is a series of handmade ceramic plates depicting black artists, writers, and activists. In this exhibition, we chose those who identify as LGBTQ+ and printed enlarged photos of them.

LGBTQ+ as a community knows no borders. The exhibition includes the tragic story of Sarah Hegazi, one of the most well-known lesbian heroes of recent years for queer people in the Middle East. Sarah Hegazi (1989-2017) was an Egyptian socialist, writer and lesbian activist. She was arrested, imprisoned, and tortured in Egypt for three months after flying a rainbow flag at a Mashrou’ Leila concert in Cairo in 2017. Hegazi lived with PTSD resulting from the prison torture she experienced in Egypt. She was granted asylum in Canada, living there until her death.

Last year, the researcher and activist Sara Alsherif organised the painting of a communal mural of Hegazi in York Grove in Brighton. The exhibition includes a photo of the mural as well as a series of illustrated texts from Sarah’s prison diary written as a series of letters to her friends.

In many countries, even the UK, to be gay, lesbian, and even more so for trans people, one needs to be a hero. With the new policing and public order laws, it feels dangerous to raise your voice in protest or a placard. To celebrate the hero in each of us, SEAS commissioned the Brighton-based photographer Pierre Monnerville to carry out a photoshoot at Trans Pride Brighton of people presenting messages concerning LGBTQ+ identities, rights and aspirations. Another photoshoot like this will be carried out at the opening of the exhibition on Friday, August 5 from 6pm to 8pm.